Stuck around the house for most of the day today, with only the joy of a trip to the dole to break up the day.  Boredom indeed, as our cover stars today might have said on occasion.

However there was some comeback on yesterday's jobseeking activities - most of it positive!  Firstly the bad news - the potential contract in Liverpool isn't going to happen - they want specific financial services experience - possibly the only thing in my CV that I can't point to directly, or manufacture from somewhere.  So discussed it with the recruitment consultant and decided not to push forward this time.

Better news from Preston - one other candidate being interviewed tomorrow, so some feedback by Thursday, hopefully.  Current vibes are positive, but the company do want to see someone else for comparison purposes, at least.  Recruitment consultant is upbeat, but then aren't they always?  It does look like it's a two-horse race though, so the odds are as good as they could be I suppose.

And still better news from London - I'm going down there next week to do some serious scoping of the project, with a view to kicking things off asap, if everyone is happy.  I quoted some daily rates that they accepted without question - so which are probably too low - but which from my perspective at least will give an acceptable return on the work done.

So it's a bit of a juggling act at the moment - keeping things moving forwards on all fronts, whilst keeping as many options open as possible.

One slight moment of panic at one stage today though - I emailed Mrs W. to keep her up to date with progress, copying in an email from London, to which she replied.  Not to me, but the the FD down in London.  Oh dear.  Luckily, she didn't say anything that was libellous, embarrassing or downright rude (for once!) so no damage done - but she was mortified, of course.  Naturally it was my fault - putting the email in an attachment rather than in the body of my email - how could I?  I was more amused than alarmed I have to say - at least after I read her reply!

How filthy was the weather today?  Where did that come from?  And aren't cats supposed to be extremely reluctant to get wet? 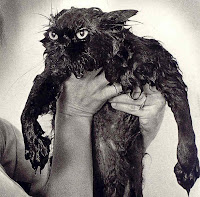 He insisted on having free passage outside all day, then coming in, sopping wet, at random intervals.  Then getting dry.

Getting dry involves jumping onto my lap and transferring wetness of fur into wetness of clothes.  Every.  Single.  Time.

Then going out and doing it all again.  Bless him. 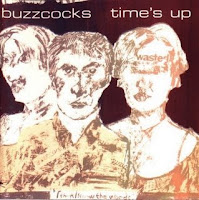 Very early Buzzcocks on the soundtrack today.  Time's Up is (was) a bootleg of Devoto-era Buzzcocks, that - I think - eventually got an official release.  It includes the tracks that eventually found themselves onto the 'Spiral Scratch' ep with a mix of tunes that were released by Shelley-era Buzzcocks either as singles or on their first LP - plus the wonderful Beefheart tune, 'I Love You, You Big Dummy' that Magazine eventually recorded - and which they are still using today, in reformed guise, as their final encore.

Yes, it's lo-fi and messy, and all the better for it.  Bear in mind that this is the motherlode - the whole Manchester scene - Buzzcocks, Magazine, The Fall, Joy Division/New Order, Factory Records, the Stone Roses, Happy Mondays - and yes, Oasis - it all started with this band and this bootleg.

This is ace - filmed at the Lesser Free Trade Hall - the site of the famous Sex Pistols gigs that kicked the whole thing off.  If the date at the beginning of the clip is to be believed, this was actually filmed at the second of the two Pistols gigs and would have been Buzzcocks' first ever concert.  Obviously Breakdown is dubbed over the top - wouldn't it have been great to hear the actual audio instead?