A watched pot never boils, a watched phone never rings...and, especially, an anticipated recruitment consultant never calls.  My last conversation suggested that the 'other' candidate would be interviewed either on Friday or on Monday...so, it now being Tuesday, I thought I might get the call.  Cue sound of fingernails being drummed on desk as tumbleweed balls blow by....

But no, not today.  It's not surprising, it's not unusual (as Tom might say) but it is a tad frustrating.  Especially as I have to make a firm decision on Staines by the end of the week...and I think I know what that decision will be!

Indeed, I spent a large part of the day putting together some formal terms of reference for the Staines contract, capturing, I think, all the issues we discussed in their offices on Monday.  Sent them down to the FD for comment/approval, then emailed the insurance company to find out the implications for the mortgage cover of accepting such a contract.  Now awaiting responses from both!

Had a good chat with Simon on the phone, now back from his overseas jaunts and looking for the next role.  He'd an interview in the afternoon in London, a very interesting role that I hope he gets - heaven knows it's an organisation that could use some decent people in it!

I promised to call him next week for a chat - true to form, he's the one being proactive about keeping in touch while I'm lapsing into my usual laissez faire mode - not good enough Paul!  My excuse that he's been jet-setting around the world and I've never known when he's going to be in the UK is at best weak - and at worst slightly pathetic!  Come on, Paul, get yourself sorted!

Postman called this morning with my new 'handsfree' car kit - my last one was fine, until I knocked off the microphone attachment with my head when getting out of the car a while ago, leaving me with a piece of a kit that was great for one-way communication - I could hear everyone fine, but no-one could hear me - but, quite frankly, lousy for the job it was intended to do.  The replacement has no moving parts at all - so nothing for me to break, hopefully.  Disappointingly, the thing only comes with a charger designed to fit into a cigarette lighter in the car - and it needed an initial ten hour charge to get up and running.  Absolutely useless, as the various chargers in my car only work with the ignition on - and I wasn't about to take any ten hour drives anywhere!  Luckily, I had an old Sony mains charger with the right connector on the bottom, so I took a chance with that, and it seemed to do the trick.  Warranty completely invalidated in the process though, I should imagine...

Spent the afternoon copying a couple of films over to my computer before running the discs back to Blockbuster - and then reviewing the online LoveFilm list, which we had allowed to run down to nothing.  A great process in theory, but in practice the website makes the selection process so difficult it is a real ballache.  Still, loads of crappy films are now queued up for our viewing pleasure - just in time for the postal strike to stop them being delivered anyway!

No matter, who needs DVDs when we've got Masterchef?  Second semifinal tonight - tall, serious Ryan up against tiny, excited David.  Ryan is the one who looks like he means business - you expect David to still be making butterfly cakes in the kitchen with his mummy - but on the day, it was a really close call.  Ryan getting the nod, but with David pushing him all the way with a good performance in the professional kitchen and some spectacular courses in the Masterchef kitchen.  Not good enough to dislodge mean, moody Ryan though - this lad has champion written all over him.

Not literally, of course.  That would look messy. 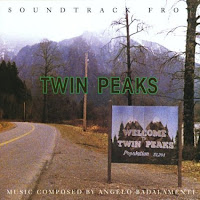 The Twin Peaks soundtrack is as mean and moody as our Ryan, the perfect soundtrack to the television series and, of course, to today's witterings here.  Twin Peaks was one of the television 'events' of the '90s - weird and unsettling in a way that only David Lynch can really achieve - that sense of something very disturbing existing just beneath the facade of everyday life.

I loved it, and got the first series on DVD when it came out, to share with Mrs W, who had never seen the original.  Probably on a ship somewhere at the time.  Sadly, we were watching it when Mrs W hear that her mother was seriously ill, and it got abandoned as we made a mad dash down to Birmingham - and because of the connotations we've never felt like picking it up again.

The music associated with the series is stunning though.  Sparse and moody, yet with an underlying beauty, the music soars at times with a huge sense of optimism.  I'm going to stop there before I start getting quoted in Pseud's corner - but just listen to this.  You'll see what I mean, hopefully.

Twin Peaks - what a series (well certainly the first one - second one was good but not up to the first one and don't get me started on the film....!).

I love the vocal version by Julee Cruise of the music you have today on the blog. I even have her album (Floating into the Night) which is in the same vain as the Twin Peaks soundtrack (which I also own) unsurprisingly given that the album is produced by David Lynch and Angelo Badalamenti!

Look forward to hearing from you next week and hopefully catching up in person if you do come down to Staines!

Oh and I also went to see Julee Cruise live at one of the Royal Theatres in London (memory has gone on which one!). She was very good. Have to do an Allmusic search to see what she went on to do!

Same as you I have been promised a phone call from the headhunters after the interview yesterday but still nothing yet....