There is a school of thought that men cannot multitask - that it is a uniquely female ability. I dispute this theory. 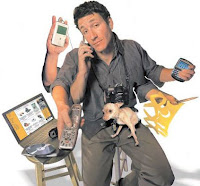 Think about it gents. On the odd occasions when the GLW* (or equivalent) is away and you have the house to yourself for any length of time, what do you do?

I'll tell you. Everything. At once.

Mark Ellen talked about this some time ago on The Word podcast, and it certainly resonated with me. When alone, you may find him cooking in the kitchen. With a guitar around his neck. Music will be playing in the background, and the television might be on, or a DVD playing, with the sound turned down. It is possible that a book or magazine will also be being read at the same time.

Basically, when we are alone, we want - actually need - to be doing everything we normally can't do - and to be doing it all at the same time. Because you never know when you'll next get the chance.

Or is it just me then?

Whatever, it was certainly me today. I had the ironing to finish, so that was my primary task. Although while I was ironing, I had a pot of soup on the stove that needed attending to on a regular basis. The TV was on, so I could watch a New Order documentary on DVD whilst ironing/cooking. Oh, and I was also checking my emails on a regular basis, in between keeping a game of Football Manager on the go.

The difference between male and female multitasking probably comes down to the sheer pointlessness of the male version. There was absolutely no need for me to do so much at once - it just felt like the right thing to do...

Anyway, the soup was/is delicious. We are back on ham and lentil after last week's red pepper and tomato, and I am going to re-recommend the recipe to you, which is here.

And the ironing is done. For another forty days.

Earlier, I spoke to the FD of the business in London about the potential contract work. Both parties very interested, but we agreed to hold fire for a week to see where we got to with the permanent role in Preston.

Spaghetti Carbonara for tea tonight. I know we've done this one before, but the search engine at the top of the blog is a touch inconsistent, I've found. Despite it telling me that no posts match my query for 'carbonara', it's all there for you on Day 39.

I need to come up with some new recipes for you! 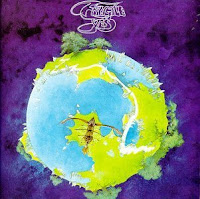 I'm showing my age today, with the music selection that iTunes has thrown up. When I was in my early teens, once I was over my 'Glam' phase, 'Prog' was where it was at - mainly that provided by Emerson, Lake & Palmer - and Yes. We dabbled in King Crimson and Genesis, but ultimately we were either in the ELP camp or the Yes camp. A bit like having favourite football teams, really.

Fragile is actually still a very listenable album - in parts. The album is bookended by the two 'big' tracks - 'Roundabout' and 'Heart of the Sunrise' - but is let down by the inclusion of short, semi-solo pieces composed by each of the band members. A bad idea all round.

Anyway, here's 'Roundabout' in all its pomp and glory - Capes! Hair! Incomprehensible lyrics!

You can't beat a bit of prog.