Today's soundtrack: Pulp - This Is Hardcore

I had my 'Workshop for the Unemployed Professional' today, so it was up and out, to get to the Swan Tavern in Winwick for ten o'clock.

An upstairs room in a local pub, a couple of flipcharts and ten, mostly mature, 'professionals' from a range of backgrounds, sat round a table.

No coffee or tea.

The course was ostensibly there to talk to us about writing CVs, job searching strategies and interview techniques. In reality, it turned into a bit of a Samaritan session for a couple of the attendees (one poor, lonely bloke in particular) to get a few things off their chest in relation to the inadequacies of the Job Centre staff, the state of the economy and the foibles of recruitment agencies.

Oh, and the 'poor, lonely bloke' wasn't me. Honest. Although I was sat next to him.

In between the regular diversions, there were one or two useful tips that reinforced what I largely already knew, and a couple of hints about how to tweak my CV to better effect, but over the years I've heard these things time and time again. If nothing else though, it was a timely reminder of the basics. Which is no bad thing I suppose.

Then off to the Job Centre itself, to sign on for the next fortnight. 'Kev' (how can he get away with 'Kev' on his official namebadge? Surely 'Kevin', as a minimum? No surname, of course) and his trainee, Debbie, had the pleasure of my signature today, although I did have to justify why I'd not applied for a job they'd kindly told me about last time (the salary was less than half my last salary).

But no matter, I've got an interview for a proper job on Friday! A call from the recruitment agency about the role they told me about last week - my CV went in on Monday and they want to see me this week - first interview, well in advance of a full shortlist being drawn up. Got to be a positive sign I feel.

Back home, to scan some relevant pages on CV/interview presentation and send them down to Son No 1, who has an interview himself today. Hopefully they reached him in time, they may be of more use to him than to me.

I finished the fourth book of the 'Red Riding' quartet today. Four books spanning nine years, based around police corruption, child pornography and murder, with a barely fictionalised Yorkshire Ripper committing his crimes in parallel.

Life on Mars it ain't.

It's not an easy - or comfortable - read, and David Peace's stylistic repetition of key passages across all four books can get a bit grating at times, but ultimately it is a powerful piece of literature. You do need to read all four books, as it is only in the final book that a number of strands from the earlier novels are brought together into a form of resolution.

I'm not sure I'd recommend the books, but as someone who lived through the period covered (1974-1983) and lived in Yorkshire for a significant part of the period - and was thus acutely aware of the Ripper and his activities - some of them very close to where we were living in Sheffield - it did have some resonance.

But it won't be for everyone.

I've now got the three films to watch on DVD - they must have simplified the books considerably for them to make sense - but will let you know what I think. 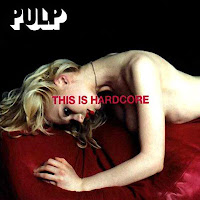 Coincidentally, we have quintessential Yorkshire band Pulp on the soundtrack today, with an album that has pornography and exploitation as its core themes. Pulp were around in Sheffield for years without making any national waves - I remember hearing of them around the same time as the Human League, Heaven 17 and the Thompson Twins were having national success - Pulp stayed very much a regional secret until they finally hit the big time with Different Class, and particularly with Common People. The follow up to this vastly successful album was 'This Is Hardcore', a far darker and more cynical album. And far less commercial, with commensurate (lack of) commercial success. It's not an easy listen and the humour that was evident in Different Class is buried far deeper here, but it's still a good album.