So after last night's excesses, I was hoping for a nice, quiet morning to recover gently, before the double header of the Grand Prix and the Everton game.

Just got myself settled, when I get the call that The Hunter has struck again, trotting past Mrs W in the kitchen with a mouse between his jaws. I finally cornered cat and prey in one of the bedrooms, where my efforts to separate the two were hamstrung by the bed itself, underneath which cat chose to base his feline activities. Eventually, after haring round the bed and crawling underneath it, I managed to grab the cat and persuade him to let go of the rodent, which I was then lucky enough to trap underneath the Tupperware box that doubles as a humane mouse trap.

One look at Mrs W's face told me there was something else to deal with. Something quite bizarre - there's been some sort of 'explosion' in one of the food cupboards. Tentatively opening the cupboard (How had this happened? Was there some sort of angry beast in here - chased in by the cat? What?) I discovered a spray of tomato salsa - everywhere. It looked, I kid you not, like someone had opened the cupboard and projectile vomited over every available space.

They hadn't. Honest. I didn't drink that much ouzo last night. 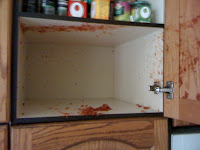 After a quick forensic review of the crime scene, this is what I think must have happened. Remember yesterday's barbecue? It was accompanied by a range of relishes, including a squeezy jar of salsa that we'd had for a while. It was the contents of this jar that had emptied itself over the cupboard - unaided by human or animal. I can only assume that the contents of the jar were 'on the turn' and had started to ferment in some way - leading to a build-up in pressure that had relieved itself by forcing the lid of the jar open and spraying the contents over the cupboard. Is this feasible? Has this ever happened to anyone else?

It's either that or we've got a poltergeist.

So, cupboard and contents cleaned and rearranged, I could now sit down and relax, no?

Mrs W had retreated to the garden whilst the spring clean was under way, where she had discovered the remains of the squirrel who'd tangled with Pedro yesterday. Pedro (or maybe some other creature of the garden) had kindly dragged the stiffening beast up onto the lawn for us to find.

And for Paul to dispose of.

So, on with the gardening gloves, a couple of plastic bags, and Sammy Squirrel was given a rather undignified incarceration, leaving only the question of which recycling bin was designed for squirrels (no, he did not get a Christian burial I'm afraid). He ended up in the green one, largely on the basis that this was the next to be collected.

Finally, I got to sit down. For five minutes, before cranking up the barbie for the remaining burgers and sausages, not consumed last night.

Then it was time for the Grand Prix. An interesting race, the frontrunners risking a two stop strategy when a one-stop seemed to be the preferred option for most teams. And the one-stop proved to be the right one, with the two Brawns making the pace as the pitstop strategies unfolded. Hamilton, on pole and on a two-stop, pushed the two Brawns hard - too hard in the end, spinning off on the final lap. With the Red Bulls nowhere, the only twist comes with the finishing order, a resurgent Barrichello likely to push Button all the way to the end of the season.

And so to the football. We've struggled year after year at Craven Cottage, but a victory lat year had hopefully laid that bogie to rest. And that seemed to be the likely outcome after a first half in which Tim Cahill had given us the lead and we'd never looked under any real pressure.

Second half though, the gameplan unravelled as Fulham came out of the traps the stronger. After a very fortunate deflection they were level, and eventually took all three points following a fine goal from Damien Duff. Git.

We nearly forced an equaliser, but never really looked like we were going to come back into the game, resorting to hoofball at the death. So three defeats out of four, rooted in the bottom three and struggling.

But not panicking. Just yet. Despite a bit of knee-jerking on the forums and message lists, I'm not convinced we're actually playing that badly now - the season is still there to be turned round, although Moyes could do with blooding some of the new boys to freshen things up a bit, I feel.

Final crank of the barbie this evening to finish off the meat (some nice rump steaks and lamb noisettes) with salad, before the early evening chill sent us indoors to watch the end of Series 6 of The Shield (just one more to go), and finally to bed.

And, finally, some peace and quiet. 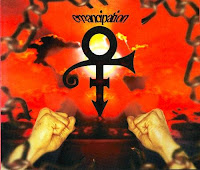 Oh, some Prince on the soundtrack today, although not Prince at his most inspiring, I'm afraid. Emancipation is a three-CD set, released by Prince at the end of his 'Slave' phase (hence 'Emancipation' - you see what he did there?)

Freed from record company control, Prince chucked everything he had lying around onto this three hour set, turning what could have been a half decent single album into a bit of a sprawling mess. That said, even indifferent Prince has plenty to recommend it. This album is partially saved by a couple of decent tracks, including two excellent covers. This is the old Stylistics number, 'Betcha By Golly Wow' and (cheesy video notwithstanding) it's ace. Enjoy.