August Bank Holiday, and, naturally, the weather is a bit crap. Luckily it was dry this morning, so whilst Mrs W took herself off to the gym, I grasped the nettle - almost literally - and got out into the garden. Three main chores - some weeding and hoeing, some planting and some lawn repair.

We've got ace neighbours on both sides, and George (on the left) seems to have decided to take me under his wing on the gardening front. Over the last couple of weeks he's taken to giving me lots of little plants in flower pots, for me to stick out in the garden. He did tell me what they were called, but I've forgotten. But they are flowers, basically. Green leaves and (in some cases) little purple flowers. That's all I know and, to be honest, all I think I need to know.

So a bit of turning over - we've essentially got one long flower bed running next to the fence that tends to get a bit overgrown, so I broke up the soil with this twisty soil-breaker-upper thing I've got, pulled out all the grass and weeds and planted the flowers. And I have to say it's an improvement.

Next job - try and persuade the grass to grow in the area that used to be under Mrs W's bird table. Over time, all the excess seed fell from the table and sat, rotting, underneath, killing off the grass that was growing there. I've had a couple of goes at sorting this out, involving the digging out of a lot of old seed and putting grass seed down, but it's been reluctant to take. I'm hoping that with the passage of time, the old birdseed has mulched down sufficiently into a form of super-compost that the grass seed will feed lustily on. If this doesn't take, I think come next spring I might have to do some re-turfing, but I'd rather get it to grow if I could. So we currently have a patch of muddy earth under the kitchen window that I am hoping will turn over the next couple of weeks into a patch of green lushness.

Right on cue, the heavens opened, saving me the bother of watering in all this planty stuff myself, but condemning us to an afternoon indoors. I called the boys, and was pleased to hear that Son No 1 has been picking up some work, an after visiting his girlfriend at the end of this week, is going to be working on a contract up to Christmas, which will get some cash in his back pocket, if nothing else! Son No 2 is just about to come back up North as term starts at Uni soon. He's been doing some more blogging, this time about the Oasis split, and mighty fine it is too - you can read it here.

Other than that, a quiet day. Late on, listening to some tunes, I was taken with the resonance of Mr Pete Wylie's thoughts on the Blues, hence the 'bonus' post late on! 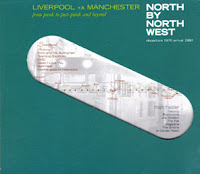 Pete Wylie, of course, was one of the leading lights in the Liverpool music renaissance of the late '70s, and appears (in one of his many 'Wah!' incarnations on today's soundtrack, which is a three-cd collection of the best music released in Liverpool and Manchester in the immediate aftermath of punk. Some 'famous' bands (OMD, Echo & the Bunnymen, Joy Division) some not so famous (Those Naughty Lumps, Dalek I Love You, Ludus) but all well worthy of a listen.

John Cooper Clarke is also included on the album, which gives me the excuse to post this track - Health Fanatic, from the film Urgh! A Music War:

Hi Paul,
Try this lot (the guitarist is a mate's son) and let me know what you think.

They've been working with the brothers who did the last England song (which is no great recomendation) and the plan is to release an album this autumn - although that's been the case for some time now! I've got an intro CD with more tracks than are on myspace.