Two bits of 'all Greek' today - later on it was the Europa League game against AEK Athens, but firstly I had some IT fiddling to do. Well, I didn't have to do it, but I had a bee in my bonnet that needed scratching. Or something.

It's been puzzling me for some time why I can use my home wireless network to access the internet from both desktop and netbook, but can't access files from each computer on the other, or share printers, like you can on any other network. Or perhaps I could, but had never worked out how to do it.

So I had a play. A looong play, that took most of the day. But at the end of the day, I ended up with a networked printer that I can use wirelessly, and two computers that can 'see' each other on the network. Oh, and a single iTunes library that is accessible by two separate computers.

I'm not quite sure how I did it, and there is still some tweaking required to get all my main computer files visible on the netbook (at present it's only 'Public' directories that are visible, which might be for best anyway) but the key change seemed to be giving the main computer and the netbook different names - originally they'd both been assigned the same 'identifier', if that makes sense.

So there you go. Told you it was interesting, didn't I? What? Oh.

Anyway, the football. Difficult to know what to expect at home to AEK - they have a long European pedigree, and we have been playing like dogs all season. With an injury list as long as a very long arm, coupled with suspensions and ineligibilities, it had the potential to be a difficult night.

No father or nephew with me tonight, so I could make my own way there, and pick up a cheeky chippy tea on the way in as well. I wore my snide Barbour tonight (£5 at Glastonbury) and was delighted to discover that the pockets are huge, big enough to accommodate Savoury and Chips, as well as a bottle of pop. I'm sure 'proper' Barbour pockets are designed to hold a brace of pheasants or something - but not many of them on the mean streets of Walton.

Chippys are ace, aren't they? And one of the few places where regional variations still exist and, indeed, flourish. For instance, I'll bet no-one outside of the Merseyside conurbation has a clue what I'm talking about when I talk about the 'Savoury' - I've never seen them anywhere outside of Merseyside. Anyway, a Savoury is basically mashed potato, flavoured with some fish (not much) and herbs, circular, around 5-6 inches in diameter and an inch deep, battered and deep fried. It's not a fishcake by any stretch of the imagination, but that's its nearest culinary relative, I guess.

Anyway, the footy. First start on the left wing for Diniyar Biliyanetdinov (hereafter 'Billy'), and Danny Gosling as an emergency right back. And a stroll in the park. Two quick goals from Billy corners - my, this lad knows how to put a cross in! and a phenomenal strike from Stephen Pienaar put us 3-0 up inside about half an hour, and thereafter it was training match stuff. Cahill substituted at half time after a daft booking, Billy worryingly limping off with what looked like a groin strain, and two sendings off (one each) - Saha walking in injury time for a daft flick at the shoulder of one of their

defenders who went down clutching his face as if shot. A fourth goal from Jo gave us a comfortable win but really, AEK didn't turn up. Will be much tougher against Blackburn on Sunday.

Lucas Neill, signed on a free, introduced to the crowd at half time. Some mutterings on the message boards, but I think it's a good piece of business - a proven Premiership defender, no fee, one year contract, a bit more strength in depth. Wages will be obscene, no doubt, but that's a given anyway.

Oh, and top entertainment from the AEK fans, who didn't stop singing, dancing and showing off all game. Choreographed waving, bowing and jigging all match. Half of them probably won't know what the final score was, but probably don't care either. Top notch fannage. 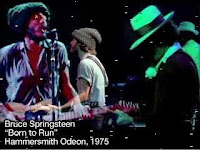 The Boss on the soundtrack - for the first time? Can't remember. Anyway, this from the famously hyped London concert in 1975 where 'Rock 'n' Roll Future' was introduced to a sceptical UK. With the benefit of hindsight, Bruce delivered big style on the night - this is a rollicking set with some great tracks from the recently released Born To Run album and his earlier stuff, including a great (aren't they all?) 'Rosalita'.

After missing the Boss for years (I queued up for tickets at Manchester Belle Vue - or was it the Apollo? - in 1978 without success) I finally saw him for the first time at Old Trafford last year, when he didn't disappoint, than of course at Glastonbury earlier this year. A performance that might just have begun to remove Son No 2's 'Brucie Blind Spot' - even though he was too drunk to remember most of the set!

Bruce was, and is, an international treasure and should be cherished.

Rosalita - live in Phoenix 1978 - as one You Tube poster says, 'This nine minutes is more cool than my whole life'.