Jobcentre day today, signing on augmented by an 'interview' with a consultant to check that I'm doing all I can to get a job. This is my second such interview, and means that I've been on the job hunt for just about six months now.

Six months! Where has the time gone?

Anyway. As always, the Jobcentre staff have treated me with the utmost courtesy and respect, but it's a painful process. There's never been any suggestion that I'm doing anything less than I ought to on the job hunt, but there are certain things they have to push my way to 'encourage' me to get a job. This time, there was some (quite useful, actually) information on becoming self-employed, and some (probably counterproductive) financial 'inducements' I can offer to potential employers to persuade them to employ me. Five hundred quid up front if they offer me a job! Another five hundred quid if I actually stay in the job!! A contribution to any LSC retraining costs they may incur in training me up to do the job!

I know it's easy to be flippant, but we all know that five hundred quid from the Jobcentre is not going to swing any job decision at my level my way. And to be fair, they know that as well. But they have to follow the rules and offer it to me. Fair enough, I suppose.

One thing rankles, though. One of the other 'opportunities' offered to me today was a workshop, to advise me on the quality of my CV and my interview technique. Which, of course, I have agreed to undertake. Whilst it's presented as optional, I suspect I would have to have a pretty good reason not to accept. And you never know, there may be stuff I'm missing, that could help.

But that's not the issue. My interviewer called the agency running the workshop to arrange my attendance, and referred to me as one of her 'customers'.

Sorry love - whatever I am, I'm not your 'customer'. You're not selling anything, and I'm sure as hell not buying.

Now I'm sure it's terminology that all Jobcentre staff have been told they must use in referring to us doleys, but it's just wrong on so many levels. And it shouldn't annoy me - but it does.

Following the above shenanigans, I strolled over to Homebase and picked up some basic tiling kit, and a batch of mirror tiles for the bathroom. Now I've spent the money, I'm committed to doing some DIY - but not today, I feel.

More adventures with the pussycat today - rescuing the bird he dragged into the house today. Thankfully this one was sparrow- rather than pigeon-sized, making it easier to separate cat from bird and to free the bird.

Catching the bird was made a lot easier by its apparent deadness, although when I took it outside it perked up suddenly, and after a few seconds flew off of its own accord. Presumably it was only playing dead, hoping Pedro would lose interest and go.

A tricky one, this. Pedro goes out to play. If we leave the back door open, as often as not, he'll bring a bird or a rodent into the house. If we don't, he can't. But he tends to bring them in alive, meaning I've got a chance of catching the thing and releasing it, still alive. If he can't bring them in, then we don't see them, and they'll invariably end up dead. What's better?

A moral maze, that one.

A bit of Elton John today. Now most of you, when you think of Elton, will think of the 'flamboyant', hissy-fit queen, conspicuous overconsumption and over the top Vegas-style shows. Not the music, so much. 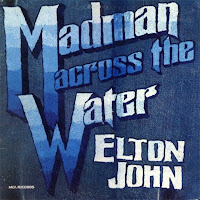 But there was a time when Elton was a very hip, credible performer, seen as a sort of English Randy Newman. And he produced a run of albums in the early Seventies that are worthy of anyone's attention, and are as good an example of piano-driven singer-songwriter material as anything produced by anyone in the last forty years of so. I'm talking about Madman Across The Water, Tumbleweed Connection, Honky Chateau in particular.

When Elton was good, he was very, very good. And this track is one of the best. The lead-off track on Madman, Tiny Dancer is just sublime. You may know it from the film 'Almost Famous', or from the Ben Folds version, but Elton's original performance is the best.