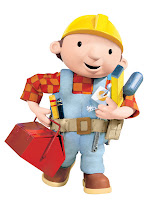 A bit of bathroom handiwork required today, so I had to drag the toolbox out of the garage, dust the cobwebs of the electric drill and get my hands dirty.

We've a shower curtain around the bath that has been sagging more and more in recent weeks, to the extent that it's beginning to cause the tiling to crack. The rail has never been perfect, the layout of the bathroom means that the rail has to go through a 90 degree bend rather than being straight, and any engineer out there will appreciate that this makes the rail far more unstable than if it was simply a straight run from end to end. Add to this the fact that the tiling in the bathroom has been a bit of a botch job from day one, and we had a disaster waiting to happen.

So I took the rail off, shortened the 'long' run by a foot or so, reassembled and re-drilled. It looks now like I've got a more stable frame, with far less chance of the rail sagging or the tile loosening.

Which is good. What is not so good is the state of the rest of the tiling, particularly over the sink area. Looks like another project to undertake - no bad thing, while I'm sat here counting the days. Strip off the loose tiles, salvage what I can, replace any broken ones with some mirror tiles over the sink. Got to be worth a go.

Now I do have some previous on this - I have re-tiled a bathroom, many years ago - so I think a trip to Homebase tomorrow for a bit of research could well be in order.

Otherwise it was a pretty uneventful day today - Mrs W is back at work, the phone has been quiet and the jobsites are relatively bare. I did get a call from one of my contacts - the business case exercise I mentioned last week will most likely start coming through on Friday - but in the meantime there's not a lot more I can do than wait. 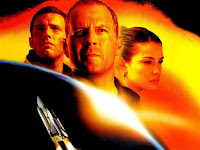 So straight on to today's soundtrack - the soundtrack album for the film 'Armageddon'. That's the one where Bruce Willis and Ben Affleck singlehandedly (doublehandedly?) save the world from a big eff-off asteroid that's about to bang into it. It's a while since I've seen it, but I think it involves landing some spacecraft on the asteroid and planting some explosives, after riding round on some big caterpillar track truck things they managed to get up there.

A load of old rubbish really, but at the same time hugely entertaining, in an over the top, dials turned up to eleven, brain candy sort of way. A lot like the soundtrack, which includes contributions from Bob Seger, Jon Bon Jovi, ZZ Top...and of course Aerosmith, who provide the album (and film) with its blockbuster track, 'I Don't Want To Miss A Thing'.

Now the purist rock snob in me tells me I should hate this track, but there are times when an overblown rock ballad is just what you want - and as overblown rock ballads go, this is the daddy. I love the way Steve Tyler plays it completely straight - no knowing winks or asides to the camera. Not sure about the way Liv looks at her daddy at the end of the video though...!

Turn all your mental faculties down to zero and enjoy!