Actually, she didn't, but why let the truth get in the way of a convoluted song-title-based pun?

Having started to re-tile the bathroom, in true male fashion I have chosen to leave that job unfinished and start another one. To wit, the cleaning/de-weeding of the driveway at the front of the house. We've got one of those brick-laid drives, which look great when clean and well-maintained, but which look a mess when they get dirty and clogged with grass, moss and weeds.

And it looks even worse when the neighbours have just cleaned theirs up... 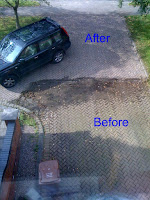 So suitably shamed, it was on the list of things to do. And with the sudden onset of decent weather for a few days, I thought best do the drive while the sun was shining and save the tiling for the rainy days that will surely return soon.

So it was on with the wellies, out with the pressure washer, and away we went. I actually really enjoy half of this job - the pressure washing itself, blasting away at the moss and leaves, and sending a mucky river of sludge down the driveway, pristine bricks behind me. Unfortunately this sludge has got to be disposed of somehow - and it's wet, heavy and smelly.

Anyway, half the drive was successfully cleaned today, leaving the other half for tomorrow.

Oh, the convoluted song-title based pun? Surprisingly, I've two completely separate songs with the title 'Drive, She Said' - one by John Cooper Clarke, the other by Julian Cope. Unsurprisingly, neither refer to the singers' spouses ordering them to scrub the pathway... 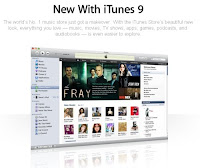 So not much else to report today. While I was out breaking my back in the name of good neighbourliness, I was downloading the latest version of iTunes, which was launched with great fanfare by Apple the previous day. No major changes, other than an interesting 'Genius Mix' feature that analyses your music collection and prepares 'mix tapes' based upon specific music types. I suspect a few teething problems, since it gave me a 'Female Singer/Songwriter Mix' that was based upon 'Crowded House, Edwyn Collins, Scouting For Girls and others'.

Mrs W returned home in a nice Lexus tonight - her boss is changing his company car and she's got the use of his old car for a week or so. Very nice it is too, albeit with a tiny boot, and not something she ought to be getting used to any time soon! Not that I'm jealous or anything!

She brought home a couple of Salmon steaks, which I baked in the oven in foil parcels - I marinated the salmon in some sesame oil and maple syrup, with some chopped garlic and seasoning, than baked in a hot oven for 20 minutes or so. Served the salmon on a bed of fried brown rice, combined with a melange of stirfried vegetables.

The Dame on the soundtrack today. Is this for the first time? Can't remember him coming up before. Bowie at the Beeb is, unsurprisingly, a compilation of songs recorded in session for the BBC, mainly from his pre-Ziggy period, with a 'bonus' disc recorded for the Beeb in 2000. I've quite a selection of BBC session discs, and by and large the quality is pretty high. I'd particularly recommend the Zeppelin sessions, the Hendrix sessions and, naturally, The Beatles at the Beeb as well.

Bowie is on the cover of this month's edition of Word as well, which turned up today. To be read in the garden this weekend when the sun is shining, bottle of cider on the go, cat at my feet!

And here's the Dame on the Beeb - actually on the Whistle Test back in 1972, in his satin and tat!