Chips ahoy in the bathroom today, as I started my re-tiling project. Today was about taking off the ill-fitting tiles, salvaging as many as I could for re-tiling, and preparing the underlying wall ready for re-tiling.

I don't know who did the original tiling, whether it was the original builders (my guess) or people who owned the house before us, but whoever, it was a botch job even I would have been ashamed of. One section of tiles had bowed out away from the wall, creating a ridge above the sink that was looking more and more unstable. My solution - to take out all the unstable tiles and to re-tile, using as many of the original tiles as could, avoiding the need to find matching tiles somewhere. Inevitably some of the tiles were going to break in the removal process (although not as many as I thought would, I managed to salvage most of the tiles I took off) so the plan is to put up some mirror tiles above the washbasin, to replace the frankly cheap looking mirror that's been hanging there since we moved in.

Having got the tiles off - I needed to remove around thirty tiles in total - I got the sander ready. I've got one of these Black and Decker Quattro things, which really is the ultimate boy's toy - drill, saw, screwdriver and sander all in one bright orange battery-driven thing. On with the sander attachment and the next thing, I'm whipping up a dust storm in the bathroom. I'm still staggered (and secretly quite proud) just how much mess I managed to make! Of course, I forgot to take all the stuff off the bathroom shelves before starting, so everything got completely covered in the plaster dust (including me - any one would have thought I had grey hair...). 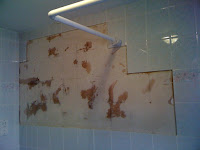 Having got the wall into a satisfactorily flat, loose plaster-free state, it was time to get the Dyson out. Happily the beast coped admirably with all the dust, tile chips and general detritus I'd created and I'm now ready for Phase Two of Project Retile - cleaning up the 'saved' tiles, removing all traces of old grout and adhesive before sticking them back up again. Oh, and trimming the tiles where necessary so they actually fit on the wall this time!

Note the quality of the shower rail, by the way...

However, we've a couple of days of nice weather forecast, so Projects Mow The Lawn and Clean The Driveway might have to take precedence...

Next, it was on with the breadmaker to make the dough for tonight's pizzas, to be consumed whilst watching the England game. I'm not quite sure why, but it's become customary to eat pizza when watching football on the telly at Waring Towers.

Not that I'm complaining, you understand.

And bugger me if England don't do a demolition job on Croatia. It would be tempting to assume this was because Croatia were awful - and they were - but I have to say that England went about their business efficiently and effectively. Robert Green played well in goal (when he had to), Aaron Lennon made the right side of midfield his own, Gerrard and Lampard proved they can play together if they re told what to do and are disciplined enough to do it, The Boy buzzed around and Barry held it together in front of the defence. If I was being picky, I would point out that Emile still couldn't hit a barn door with a banjo, and Glen Johnson is a decent winger but a crap full back - but you can't argue with 5-1 and a place at the World Cup with two games to spare.

Of course all the commentators and media are beginning to talk up our chances of winning the whole thing, thereby putting the pressure onto the team that will ultimately be self-defeating - although you do feel that Capello is less bothered with what the media think, or demand, than any of his predecessors. And that might just be the difference this time.

I make no apologies for The Hold Steady coming up on the soundtrack again - I love this band. This album is an eMusic download that I think is unavailable elsewhere, a live performance recorded in between Separation Sunday and Boys and Girls in America. And it's as sloppy, shambolic - and uplifting and joyous - as any other Hold Steady performance. You must see this band live - they will change your life. You will run away to Minneapolis, drink too much, get high too often and ultimately drown in the Mississippi River.

Probably. Don't say I didn't warn you though.

'Your Little Hoodrat Friend' is one of their best 'early' songs and ticks all the boxes - getting high, self-harm, unfulfilled sexual needs - and the obligatory mention of the Mississippi.