Today's soundtrack: The Waterboys - This is the Sea 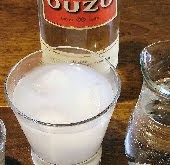 I blame the Ouzo.

A long day today, but hugely enjoyable too. For once, the sun shone at the weekend so we decided to go ahead with the plans for a mini-barbecue in the early evening. Mrs W was up early to get the final few essentials - bread buns, spring onions for the salad - and lemonade for the Pimms!

While she was out, I knocked up a quick loaf for our brunch - BLTs on fresh squidgy white bread. Yum!

Mrs W then chased the sun round the garden, while I made a start on cleaning up the tiles salvaged from the bathroom. In the meantime Pedro launched a campaign of shock and awe on the neighbourhood's wildlife. Firstly, he managed to catch another small vole and disappear down the banks with it before we could catch it. This, however, was a mere appetiser for his piece de resistance.

I was indoors, updating this thing. Mrs W was outdoors, iPod on, eyes closed. Completely oblivious to the carnage happening but a few feet away. Pedro had - somehow - caught a squirrel and was busy going medieval on its ass. Now, to be fair, the squirrels in our garden are a cheeky bunch and have systematically taunted all our cats over the years, always escaping by the skin of their teeth.

But not today. Pedro got one back for the felines. Sadly, this state of affairs could not be tolerated by the grownups, so we chased cat and squirrel around the garden for a while and finally got them separated. Cat grounded, squirrel cowering under the ivy and ultimately disappearing under its own steam.

So no barbecued squirrel today, just some burgers, sausages and chicken. Happily the barbecue was in pretty clean shape, so it was just a case of chucking the charcoal on, getting it alight and cooking the food.

But first the Pimms. One big jug, sliced fruit and cucumber, loads of ice, Pimms and lemonade. The bottle suggests a ratio of 1 part Pimms to three of lemonade. Yeah right. Ours might have been a tad stronger, I suspect.

Slipped down nicely, neither of us feeling any pain.

That is, until I decided to fiddle with the flames. Now let this be a warning to you. Just because a lump of charcoal is sat away from the growing fire, and looks black and cold, do not assume said lump is capable of being picked up by hand and placed on top of the pyre. I did, and I have the blisters to prove it.

But anyway, food was delicious, as was the wine we drank while we were cooking and eating. The shadows lengthened, so it was back indoors for a spot of TV and a drop of Ouzo. At which point it all gets a bit blurry, as I settled down in front of the computer, headphones on, listening to Beatles and typing the rubbish you can see below. At some point Mrs W came down from the bedroom to complain about my singing, and later - much later - I turned off and crawled into bed.

But the Ouzo was to blame, not me. 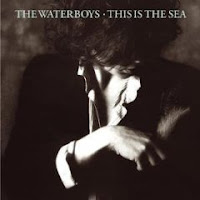 The Waterboys were, briefly, one of the Next Big Things in the '80s. This is The Sea was their third album, and the last of their 'Big Music' phase, before they got all rootsy and raggle taggle with Fisherman's Blues.

'The Whole of the Moon' was the Big Track on the album, and it sounds as good now as it did then.

Winter 1986..Hammersmith Palais...Waterboys live in concert...misguided experiment in eye liner applied by slightly Goth girlfriend... Why do I feel the need to confess this now?