F5 Day? What on earth are you talking about, Paul?

F5 Day! Otherwise known as Transfer Deadline Day - a day largely spent (at home, or in the office) pressing the 'F5' key on my computer on a regular basis - 'F5' being the key that refreshes the current web page, which today is the web page that shows all the transfer gossip and deals as they happen.

Of course, nowadays most websites dealing with rolling news like this update themselves, to save you the bother of the manual refresh, but that's not half as much fun. Pressing the F5 key helps give the illusion that you control this process, somehow. 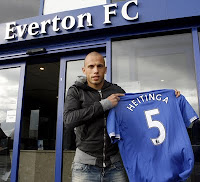 So what did this last minute flurry of transfer activity actually achieve? Very little, actually. Everton ended up doing one of the few 'major' deals of the day, acquiring Johnny Heitinga from Athletico Madrid. Johnny, who is an evil looking mother, can play both centre back and full back, which gives us plenty of cover at the back following Sylvan Distin's arrival last week. We could have done with spending a bit more of the Lescott money, but sadly that was our lot for this transfer window.

I didn't actually spend all day sat in front of the computer breaking my F5 key all day, you'll be pleased to hear. Oh no. That would have been too sad by far. Anyway, Mrs W is off work and we needed to be doing some 'married couple' stuff.

No, not that sort of stuff, you potty-minded bunch. I took her out for lunch, to one of our local pubs, the Riverside Inn just outside Weaverham, which had been recommended to me a while ago, but somewhere I'd never got round to trying out. Not so Mrs W, who I found out had been there at least twice before with work colleagues. But it's in a nice location, on the riverside (Duh!) and with a decent menu...and with a 'two for one' deal on as well!

I know how to show a lass a good time...

And very nice it was too, although it got pretty busy as lunchtime progressed. But popular is good, if it was rubbish there'd have been no-one there! 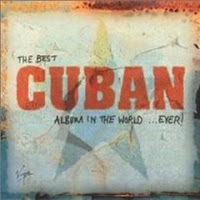 It's another of those 'Best Album...Ever!' compilations today, this one devoted to the sounds of Cuba. I wouldn't say this was my favourite style of music, but when it's good, it's very good indeed. My appetite was whetted by the 'Buena Vista Social Club' album and film, when Ry Cooder journeyed to Cuba, re-discovering a group of senior citizens - ex singers and musicians who had not played or sung professionally for decades. The film is the story of them re-discovering their muse, eventually touring and performing at Carnegie Hall in New York. It's a heartwarming film and some of the music is sublime.

This compilation was no doubt released on the back of the Buena Vista Social Club, and while it's not a bad compilation, the standard is a bit variable.

'Chan Chan' is one of the tunes featured both on this compilation and on the BVSC album - here it is being performed by Ry Cooder and a number of the original BVSC members.