It was the Singapore Grand Prix today, played out at night, under the lights around the city streets. Very spectacular, the lighting and scenery making the event look more like a video game than a 'real' race.

It was at the corresponding event last year that the Renault team took matters into their own hands by instructing Nelson Piquet Jr to deliberately crash, thereby handing victory to his teammate, Fernando Alonso. Piquet, no doubt 'piqued' (you see what I did there?) by his recent dismissal from the Renault team, grassed up his ex-team, causing Flavio Briatore to be banned from racing forthwith and another senior team member to be banned for five years. Renault itself received a suspended sentence but, more damagingly, saw its major sponsors distancing themselves financially from the team which may ultimately cause them to leave Formula One next season.

And a good thing too, I say. It is inconceivable to me that you can 'engineer' a crash in a Formula One race - especially on a street circuit - that you can guarantee will not endanger the lives of drivers, stewards and the general public in some way. Luckily, no-one was injured in Singapore last year - but that was by no means a foregone conclusion.

And so to this year's race. Hamilton on Pole, the Red Bulls not far behind, the Brawns nowhere. And yet again events transpired to keep the Brawns - and Jenson Button in particular - way out in front of the Championship. Having established a big lead in the first half of the season, it seems that even if they were to wilfully try and chuck away the title, it's still Brawn's almost by default, as the other teams continually fail to capitalise. Vettel gained a couple of points on Button and Barrichello, but it's all too little, too late.

Breadmaker in overdrive today - a sandwich loaf (with added wheatgerm) for Mrs W, than a series of pizza bases for tonight's tea - a pizza each, with a shared garlic bread.

I've got the pizza down to a fine art now. Dough mixed, rolled and rising on pizza trays, toppings sliced and set out in little bowls to be added according to personal taste. We seem to have settled on passata and mozzarella, with a selection of spiced meats, red onion, garlic, mushroom, sweetcorn - and chillies for me. Oh, and the garlic bread improves with each baking, too. Butter and crushed garlic combined and malted in the microwave and spread on the pizza base, then topped with copious herbage and more mozzarella. Delicious!

Oh, and Pedro has developed a taste for pizza crusts. Crispy, probably good for his teeth, and I can't see how it would hurt his tender bowels either. Keeps him quiet while we're eating, anyway.

So to today's soundtrack. Joy Division - for the first time, I believe. I came to Joy Division quite late - really following Ian Curtis's death - and to my eternal shame and regret, I missed seeing them when they supported Buzzcocks back in 1980. A couple more pints in the pub was more appealing than the support act. We'll see them next time, we said. Well, next time, Ian Curtis was dead, and Joy Division had become New Order.

I got a bit obsessive about Joy Division in the early eighties - as did many people I suppose. I'm sure a lot of this was due to Curtis's suicide and the myths that sprung up (and were manufactured) around that - and the re-interpretation of his lyrics in the context of his suicide.

However even now, nearly thirty years after the event, I'm still mildly obsessed with Joy Division, snapping up films, documentaries, books and reissued CDs as they become available. Why so? Well, it's a classic rock and roll story, isn't it? But ultimately, the music demands it. Brooding, layered and produced with feeling and depth by the (also doomed) Martin Hannett, the music moves me now as much as it did then. 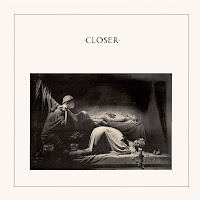 And I love the music. I love the early use of synthesisers, the power of the bass lines, the weariness to Curtis's voice.

Most of the video evidence out there comes from Joy Division's earlier work - there don't seem to be many films of them performing 'Closer' material. But to appreciate Joy Division, you need to see Ian Curtis perform. Lost in the music, carried away in his strange, air-drumming, butterfly-winged dancing, you can see what lies behind the myth.

This is Transmission - with added John Cooper Clarke at the beginning and end - in the Arndale, if I'm not mistaken!