Son No 1 is 22 today, so a quick phone call to wish him a happy one - I couldn't get through to him initially, turns out he's been sitting (and passing!) literacy and numeracy tests as a precursor to an interview next week with the Civil Service. Good for him, at least one member of the Waring family is having some success on the job front!

I left him to ponder on his plans for the evening and turned my thoughts to the day's activities. However with a stone of tomatoes provided yesterday by the aged parents, I had some cooking to do - pay attention, recipe fans!

I'd already done a quick supermarket run first thing to pick up the other ingredients I wanted for today's recipe - a sweet pepper and tomato soup, basic recipe courtesy of the New Covent Garden soup company - included in their cook book, which Mrs W has kindly bought me at Christmas. The site's got plenty of recipes, but not this one - but no matter, this is how it breaks down:

Take six red peppers, cut in half and de-seed. Place cut side down on a baking tray (or probably two).

Skin your tomatoes by putting them in a bowl of boiling water for a minute or two. If you then pierce the skins with a knife, they will come away easily from the tomato. (Really - I had my doubts about this process but it does work like a dream).

Now the recipe calls for eight tomatoes, but I ignored that. Quite apart from the fact I had twenty-odd tomatoes to get rid of, eight tomatoes vs. six red peppers just didn't seem like the right ratio.

So all twenty-odd tomatoes went onto the baking trays with the peppers, cut in half with the cut side up, this time.

Splash of olive oil over the veg, spoonful of sugar too, salt and pepper. Oh, and a scant handful of fresh basil leaves and stems, chopped.

Stick in a hot oven (190 degrees C) for about an hour. Bits will go black but don't fret.

In the meantime, chop up an onion or two, a garlic clove or two, and fry gently in your big soup pot for about 15 mins. You want them to go soft, but not brown. 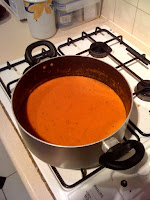 When your veg are roasted, throw the red (and black) gloopy mess on top of your onion/garlic mixture. Bring to the boil then take off the heat for a while. Whizz them up with your whizzy tool of choice into a smooth paste. Add a litre of vegetable stock (proper ready made stock please, not a couple of Vegetable Oxos) and stir thoroughly. Bring to a slow simmer and cook for a while and serve or freeze as you choose.

Some more fresh basil added at this stage would also be very nice.

Apparently you can serve this stuff cold, but really, it's crying out to be eaten hot, with lots of white crusty bread dipped in, isn't it?

There are very few people who really deserve the epithet of 'genius', but in my humble opinion, Stevie Wonder is one of the people who does. Almost twelve months ago to the day, I saw Stevie in Manchester. He was magnificent, as you would expect, despite a penchant for audience participation I could have done without. I came to hear you sing, Stevie, not 14,000 tone deaf Mancs!

Hotter Than July my be Stevie's last great album, coming off the back of a run of albums that just might be the greatest series of albums ever - from Music of my Mind through to Songs in the Key of Life. Hotter...is not quite up to that standard, but would be most other artist's best ever.

Master Blaster (Jammin') is the track the album is probably best known for, although every track is a winner really. However on my son's birthday, the only track I can really give you is 'Happy Birthday'. Credited with introducing a national holiday on Martin Luther King's birthday (and so not really that appropriate for a personal birthday celebration!) it is possibly one of the few songs that has actually had a real impact on the 'real' world.

But that's not all the Stevie you're getting today. I can't take the chance on 'Talking Book' coming up anytime soon on the soundtrack, so here's a bit of 'Superstition' for you.

Not just any old Superstition though. Superstition played live on Sesame Street. I came across this on another blog (the excellent Dust on the Stylus) some time back, and can do no more than copy the original poster's comments before playing you the track...

"It's the song as we know it but with - is it possible? - even more funk. Then it goes into an uber-funky jam for two minutes, then a false ending. Then - you fucking what? - a minute of Stevie singing 'Sesame Street'! Over Superstition! Bear in mind that, ten years into a career of classics, the guy was only 22 or 23 here; he has the kudos, the track record, the long-term immersion in music that make it seem to be something he breathes. Set free from the bonds of this earth, he's adrift in funk heaven. At the same age 'young' pop stars like Noel Gallagher and Morten Harket were still years away from making their first records."

Go on - play it - all the way through. It is the funkiest seven minutes you'll have all year!