Today's mission: To coax a bowel movement out of our recalcitrant moggy.

For a pussy cat with a bowel problem that is supposed to poo every day without fail, we'd yet to see any actual evidence of same, five days into our relationship. This, we felt, was not good news. Now I did expect that the stress of re-homing might bung things up slightly, but time was marching on and we wanted some action!

To be fair to Pedro, it didn't seem to be bothering him especially, he was continuing to explore his new surroundings happily, both indoors and out...and therein might lie the problem, because we had no idea what he might (or might not) be doing out of sight.

Anyway, Mrs W had a conversation with the vet, who advised us not to panic, we could bring him in for an examination if we wanted, but firstly to try some of the liquid laxative we'd been given on his food and to keep him indoors for 24 hours while the liquid worked its magic. Having coaxed the boy indoors, he woofed (woofed?) down his food, drugs and all, and settled down.

But not for long! Checking up on him about half an hour later, a select group of 'logs' were in and around the litter tray - one of which I would have been proud to have laid. Ouch.

Too much information I know. You will be pleased to note I did not take photographic evidence for your edification. I know how far is too far.

In other news, I took advantage of the glorious weather to get a bit of gardening done, and to sit out in the sunshine with a book and a cider. A new book started today, one I have read before but which stands re-reading: Left Foot Forward, by Garry Nelson. Nelson was a 'journeyman' professional footballer, playing in the lower divisions and ending his playing career at Charlton Athletic when they were in what is now the Championship. The book is essentially the diary of his last season (1994-95) as a player, and gives a clear impression of the reality of football in the lower leagues, where there are no mega-bucks to be earned and the pressures and concerns are far removed from those facing the Premier league megastars. 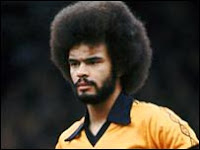 Be interesting to know what he's doing now - according to Wikipedia, after finishing his playing (and coaching) career he worked for the PFA, but I can't find him on their website now. I did learn, however, that my old mate George Berry is now Northern Commercial Director for the PFA. I say my old mate - back in 1987 or 1988 I was working on the Isle of Man auditing a shipping company and staying in one of the island's hotels - a hotel that, this particular week, was hosting Stoke City on a pre-season tour. I was having a quiet sauna one evening (as you do) when I was joined by a big bloke with a massive afro and a booming brummie accent. George (for it was he) and I had a good old chat about what was going on and George made some not-so-discreet enquiries about the 'friendliness' of the island's fair maidens. Of course I was sadly unable to provide him with the necessary information. Nice bloke, and I'm pleased he's made a real career for himself outside the game.

Soundtrack today refers back to an album made by Wendy James, ex of Transvision Vamp, called 'Now Ain't The Time For Tears' back in 1993. Rumour has it that she approached Elvis Costello about writing some songs for her first solo album, and Elvis dashed off an album's worth of songs one weekend for her to record. Which she did, only for the album to sink without trace. Elvis's own versions of these songs dripped out onto the market in haphazard fashion, some as b-sides and others never (officially) saw the light of day. Of course with access to everything ever recorded, anywhere, readily accessible with a couple of mouse clicks, it was only a matter of time before some bright spark collected the Costello versions into one virtual 'album' and made the files available for download. And only a further matter of time before I found the files and downloaded them.

Here's Wendy performing 'London's Brilliant' from that album. I suspect Elvis had just been listening to 'Clash City Rockers' when he wrote this...