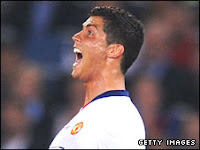 Minor bombshell this morning with the announcement that the shy and retiring Mr Ronaldo was on the verge of moving to Real Madrid for a piffling £80 million, and a salary that could amount to half a million a week by the end of his contract. Now whilst it would be easy to say that it is an obscene amount of money (which it is) and that no footballer can be worth that much money (debatable - Real anticipate the move generating around £500 million in wider income - shirts, sponsorship etc), I can't deny that I'm looking forward to the impact of the sale on the shape of the Premier League next season.

For a start, what impact will it have on ManYoo? With a potential transfer kitty in excess of £100m (assuming Siralex gets all the Ronaldo money), they could add four or five world class players to their squad, which should more than compensate for the loss of one (albeit exceptional) player. More interestingly, this may now give The Boy the opportunity to play in his natural position, rather than being stuck out wide to accommodate Ronaldo. Thus allowing him to finally develop into the player he can be.

But then throw Man City into the mix. It looks like they have tempted Tevez away from Utd and will no doubt spend big (if not wisely) elsewhere. How will they perform - will Hughes (or his successor) be able to mould a team from a collection of talented, wealthy egos?

What of Chelsea? Yet another new manager, unproven in the English game - a Scolari or a Hiddink?

Will Big Red across the park be able to find any money down the back of the sofa to attract nine quality players to add to the two man team they've latterly overperformed with?

Oh yes - this close season and next season could be fun.

Good news on the job front, for Son No 1 at least. Took him into Manchester for his interview, which has resulted in a second interview/assessment next week. Coupled with a parallel interview with another company in Bristol tomorrow, his future is looking reasonably bright - without underestimating the hurdles he's still to climb.

While he was undergoing the interview process, I headed into town for a coffee with Kevin and Alison from the previous employer. Nice to meet up with old friends again and pick up on the office gossip - and nice to be one step removed from it as well. Think they're missing me though. Like a hole in the head, no doubt, but missing me all the same. Bit of celebrity spotting as well - one of the actresses from Corrie was having a coffee on the next table. Now whilst it's sometimes difficult in Manchester City Centre not to be bumping into actors/actresses from Corrie, I do still get a mild frisson to be breathing the same air as our local minor celebrities.

I am nothing if not shallow.

In a whirlwind day for those around me, Mrs W dashed in and out of the house after work, rushing to get ready for a charity do in Frodsham supported by her employer. Not really her cup of tea, a bit too much pressure to put your hand in your pocket, but she got a decent meal and a night out out of it. More than she gets from her husband.

In Pedro news, we have adjusted his diet from sachets of food to tins of food. Basically, to try and fill him up a bit. Initial signs are good, although he's still hoovering up everything put in front of him. It worries me to speculate how much food would be too much food - not sure we'll ever get there! We are reliably informed this is not a new thing, he's been this way since birth, so we are working on the basis it's not worms - he's just greedy!

Petties on the soundtrack today - a group with a huge pop sensibility that sometimes hides the quality and depth of their material. Like Doves yesterday, I'll be seeing them a couple of times this summer - next week in Manchester, then on the Friday night at Latitude. Their live show is supposed to be stunning, and would think that, outdoors especially, it should be a night or two to remember.

One of the areas where the Pet Shop Boys excel is in their remixes, and today we are listening to the 'Further Listening' disc of Introspective, including disco and other mixes of their late '80s material. Excellent stuff.

The album contains a demo version of Nothing Can Be Proved from the film 'Scandal' (about the Profumo affair), with Dusty on vocals. Here's the video - any excuse to see Joanne Whalley as well...