My God, Canal Street must have been quiet tonight!
Impressive turnout for the Pet Shop Boys at Manchester Apollo, and whilst the crowd was actually quite mixed, there was no denying the prominent presence of designer jeans, tight t-shirts and expensive aftershave in the crowd.

And that was just me. 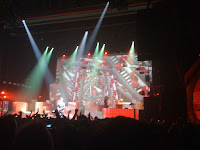 The place was rammed (NB: please don't look for double entendres in everything I type today - they are all either unintentional or figments of your own overenthusiastic imaginations) which was no surprise really - they had already sold out the O2 Arena in London for the following night, and are already selling tickets to their natural Manchester venue, the MEN Arena, for later this year.

Too late to get down the front, so hung about a third of the way back, with a great view that was unfortunately blocked late on by a group of four young lads who seemed slightly overexcited by the occasion. Managed to manoeuvre into a decent position for most of the set though.

Support band were called 'Frankmusik' - a synthesiser band led by Vincent Frank who, despite appearances, is currently dating Holly Valance. Remix duties for the Pet Shop Boys led to the tour slot, apparently. Not really my cup of tea, although the bass frequencies set my designer jeans flapping rather pleasantly.

As you would expect with the Petties, it was less about the two group members and more about the visuals, which had a very interesting 'cubic' theme - lots and lots of white boxes. Obviously there were dancers - three girls and a big black guy who got a very enthusiastic cheer from the audience - and very clever and varied projections and stuff. And costume changes and silly hats. 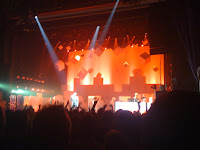 But what about the music, Paul? Well it was fab, actually. Obviously mostly pre-recorded and sequenced, although Chris Lowe did seem to be playing something most of the time, whilst stood behind his desk, obligatory sunglasses in place throughout (Chris. A word. You're indoors mate, and it's already dark.) Again sonically superb, and Neil Tennant can definitely carry a tune in his own inimitable way. And they've got a very deep and high quality back catalogue to call upon. Highlights? Lots of happy singalongs to Go West (a bit gay, that one), Domino Dancing, Always on my Mind and Left To My Own Devices amongst others, a quite moving 'Jealousy' (with dancers on stage) and a fine encore of Being Boring and West End Girls. It says something about the quality of the set that I thought 'Oh yeah - forgot about this' when West End Girls started.

Was it rock and roll? Probably not. Was it fun? Oh yes, probably as much as I've had (on my own) for a very long time.

So a good end to a day that could have been quite difficult. Following his interview 'success' yesterday...and my final understanding of just what the job entailed, Son No 1 and I needed to have a chat about one or two things. Potentially awkward, as I felt the role was completely wrong for him - but I wanted to get this across to him without pissing on his firework, as it were, or influencing him unduly - he's old enough to make his own decisions. In the end it proved ok - I think he had his own reservations deep down, and his girlfriend and Mum also gave him the same message. So he's (rightly, I think) turned down the role, and his search (alongside mine) continues. Doesn't detract from the fact he was mature and motivated enough to explore the opportunity, go through the interview and assessment, and even be prepared to take on the role as a route to asserting and gaining his own independence, despite his reservations. Hugely proud of him for all that. 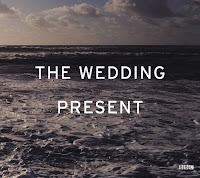 In stark contrast to the Petties, it's the Wedding Present and John Peel on the soundtrack today.

Bet the Pet Shop Boys never did a Peel Session.

The Weddoes did plenty, and they are all collected on a six-cd box set that my iPhone and iTunes is totally infatuated with. It's all good stuff in a gruff, indie sort of way, but I find a little goes a long way.

Here's a pretty ropey clip of them performing 'Why Are You Being So Reasonable Now?' from back in the day. A title that could just as easily belong to a Pet Shop Boys tune, now I come to think of it.

I don't just throw this blog together, you know.

Good day !.
You may , probably very interested to know how one can manage to receive high yields .
There is no initial capital needed You may start earning with as small sum of money as 20-100 dollars.

AimTrust is what you haven`t ever dreamt of such a chance to become rich
AimTrust incorporates an offshore structure with advanced asset management technologies in production and delivery of pipes for oil and gas.

Its head office is in Panama with structures everywhere: In USA, Canada, Cyprus.
Do you want to become an affluent person?
That`s your chance That`s what you really need!

I feel good, I began to get real money with the help of this company,
and I invite you to do the same. If it gets down to select a proper companion utilizes your funds in a right way - that`s it!.
I take now up to 2G every day, and my first investment was 500 dollars only!
It`s easy to start , just click this link http://teqeximu.maddsites.com/rytaqys.html
and lucky you`re! Let`s take this option together to become rich