World Cup qualifier in Kazakhstan today, but no evidence of extravagantly moustachio'd gentlemen in improbable swimming costumes trying to force Pamela Anderson into an arranged marriage, carrying around jars of gypsy tears...

Just a game of football on a pitch that looked like the squirrels had been at it, next to a building site. No Everton players in evidence today, Joleon Lescott on the bench as close as we got today. Ultimately it was a stroll for England, although there were a couple of early scares as Robert Green tried to justify his self-proclaimed role as 'England's Number 6'. Blushes saved by a goal line clearance and an offside flag, England eventually settled down, and ran up a two goal lead by half time, which they doubled in the second half to complete an extremely satisfying 4-0 victory. 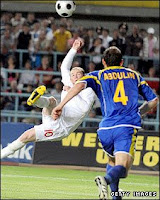 Most of the time I find it difficult to get too excited about the successes or failures of the England football team, largely I suppose because I expend loads of energy in the domestic season berating the very players I'm supposed to support when they put an England shirt on - it just doesn't feel right to applaud a Cole tackle, or a Gerrard shot, for example. Nevertheless I continue to watch and occasionally, just occasionally, when the team flatter to deceive in the latter stages of an international tournament, my latent patriotism does begin to stir. Not to the extent of sticking flags of St George on to the car or anything like that, you understand.

I have to say though that, whilst it was 'only' Khazakhstan, Cappello has finally got England playing some quite classy and elegant football and I remain cautiously optimistic that - finally - we might do ourselves justice at the World Cup next year.

Not subscribing to the waste of time that is Setanta, I was forced to turn to the Internet to watch the match, using Sopcast to pick up an Asian feed, albeit with English commentary. The quality of these feeds seems to be getting better (whether due to faster Broadband or better compression, I don't know) and I could comfortably watch a full-screen, flicker-free broadcast in the comfort of my study. Not sure about the actual legal status of what I was doing, or that someone else was doing at the other end of the internet, but it's no wonder Setanta are in trouble. Oh, and with it being an Asian feed, the adverts made for entertaining viewing as well, young kids drinking the delightfully-named 'Pocari Sweat' with gusto.

Earlier in the day I'd planned to watch some real football, as my nephew was playing in a tournament down the road in Frodsham. However the torrential rain meant that I chose to give it a miss. Sorry nephew! Maybe if my Glastonbury poncho had turned up in time.... 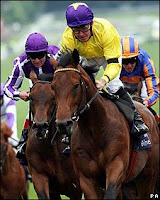 Watched the Derby earlier on as well. The Derby has never gripped me the same way the National does, although BBC were giving it the full treatment. I know it's a Major Sporting Event but, really, it's just another race, albeit with the 'best' 3yo horses on display. Anyway, the pre-race favourite, Sea The Stars, romped home, bankrupting scores of bookies and (having also won the 2,000 Guineas) no doubt soon to retire to enjoy a lifetime of 'servicing' a procession of young fillies.

Nice work if you can get it. 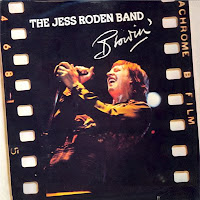 Now - Jess Roden - there's a name that few of you will recognise, and it's one of the great musical injustices that a man who is surely one of the greatest vocalists the UK has ever produced should be so unknown and underappreciated. I bought Blowin' back in 1977 when it was released and immediately fell in love with the man's voice...before my attention was diverted by the sound of snotty, disaffected youth and the three-chord energy rush that was punk. But it was an album I kept coming back to over the years. It's a live album, recorded in Birmingham and Leicester back in '76. My vinyl copy includes a stunning version of The Eagles' Desperado, which strangely doesn't appear on the sprinkling of copies now to be found on the internet, where it is replaced by an equally stunning version of I Can't Get Next To You.

Here's that version of Desperado, however, found courtesy of You Tube. Great Sax solo before the vocal kicks in, as well.