Been far too busy to post on a daily basis over the weekend, so playing catch-up today. 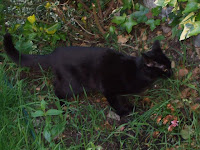 Firstly Mr Cat (as opposed to Dr Dog - of whom more later). Pedro is settling in really well and had the benefit of both a full weekend with Mrs W and also some glorious weather. As anticipated, he's already formed a really strong bond with Mrs W and is enjoying his newly-found freedom in and around the house. Although happy to explore outside in the garden (and to roam quite widely) he's happily shown no interest in the front of the house or the main road. In the house, he seems to have set himself some arbitrary borders that, so far, he's disinclined to cross. He's happy to roam around the kitchen (which has become a makeshift football pitch for him) but won't enter the two rooms leading off the kitchen. If his ball goes into either room, I have to go and get it for him. He will happily venture into the lounge, but under sufferance of going via the hall, which he's not too happy about. However since both his food and his litter tray are there, he'll visit the hall when he has to. Upstairs is also off limits at the moment. 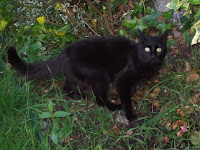 He's happily using his litter tray (and the garden borders) for Number Ones, but Number Twos are conspicuous by their absence at the moment. I suspect this is due to the stress of the move, but given his documented bowel problems, Mrs W is going to run it by the Vet just to see if we need to be doing anything.

But all in all, he's a happy, lairy little soul who is settling in well.

After doing a bit of bonding with Pedro on Friday, it was over to Huddersfield to pick up Son No 2 in advance of Saturday's game. Pub lunch, followed by a Chinese takeaway in front of a crappy film - Max Payne, based upon the computer game character. Which is invariably a bad idea.

Travel arrangements went to plan - we stopped at the same service station (and parked in the same spot) as last time, and met up with the other half of the party (and about 20,000 other Evertonians). Got to Hillingdon tube station at about 11:30, had some lunch and then headed into Wembley Park - and met up with the other 80,000 Evertonians and about 20 Chelsea fans (or so it felt). 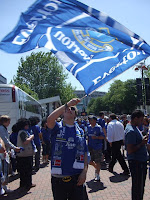 Strolled up Wembley Way, bought programmes, flags and scarves and eventually made our way into the ground, just as a bunch of scallies tried to bunk in through the security doors next to the turnstiles. Don't think any managed to make it past security, who dealt quickly and 'firmly' with the interlopers. Seats were one row from the very backmost row, but the view was still excellent. More flags on the seats, courtesy of Wembley Stadium.

The build up to kick-off went swiftly, with some impressive on-field banner work, a gospel choir and 'Abide With Me'. Pleasantries over, it was time for kick-off. And twenty-five seconds later, we scored. 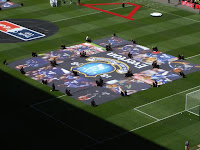 Once I'd calmed down, I turned to my dad and said "How long left?" and I think the team were asking themselves the same thing. Chelsea settled better than us and continually stretched our defence. Attacking down our right, Tony Hibbert was booked early on for a tackle on the excellent Malouda, and for the rest of the half was a passenger, scared to commit and not supported by Leon Osman as well as he should have been. He was rightly replaced by Lars Jacobsen at half time, although by then the damage had been done, Malouda free after 20 minutes to cross for an unmarked Drogba to head home the equaliser.

Second half, and we began to get back into the game, but without looking like scoring, one Saha header apart. Then on seventy minutes or so, we made the mistake of giving Lampard just enough space on the edge of the area - 2-1 to Chelsea and game over. Malouda apparently made it 3-1 minutes later although from the far end of the ground it was impossible to tell.

So Chelsea saw the game out, and that was that. Good reception for the Everton team from the fans, they'd not been good enough on the day but, taking the season as a whole, they've been magnificent and deserved their ovation. 5th place and cup finalists, with the financial constraints we have and the injuries and already small squad have suffered, is a massive achievement and the team (and club) can rightly be proud. 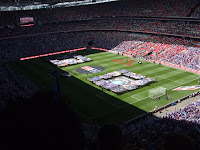 Chelsea of course have no such constraints and, on their terms, a win in the cup final essentially 'rescues' their season from failure. Which is presumably why their fans seemed to take little lasting pleasure from the win. On the tube back to Hillingdon their fans were remarkably quiet and subdued. I couldn't understand this, until I realised - their overriding emotion was not joy, but relief. Relief that they hadn't finished up without a trophy for two years running.

However far Moyes can take us, with or without funding, and however successful we get, I hope (and believe) our fans will never end up like that.

So back home, and an uneventful Sunday taken up with tent pole repairs and the return trip to Huddersfield with Son No 2. 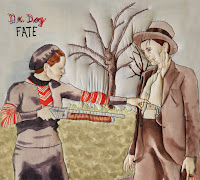 So - Dr Dog. you've never heard of them, have you? Nor had I, actually, until a glowing review of the album and some spare eMusic credits persuaded me to take the plunge.

FYI, Dr Dog are from Philadelphia and Fate is their second album. What do they sound like? The Beatles, The Band and the Beach Boys, according to their Wikipedia page. Which is stretching it a bit, fine band that they are. Anyway, make your own mind up - this is 'The Breeze' from Fate. Bit of Beach Boys in the harmonies I guess....

Dr. Dog have been around for almost ten years and have many albums. Their last two are just hetting recognition. They are also on the new movie soundtrack Tv commercial for "Funny People" with Seth Rogen and Adam Sandler.They play the "My Friend" from Fate in the commercial.