Thoughts turned to Glastonbury today, as I started my preparations for the big event. This, naturally, involved a bit of shopping. 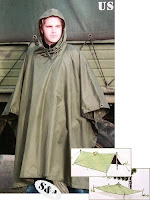 So to the internet, source of all goods Glastonian. I've already ordered a new army surplus rain poncho, as an alternative to the regular raincoat which is really only showerproof and a bit bulky to be lugging round all day, and if it's good enough for the American army, it'll be good enough for me, too. When I placed the order, a shemagh (look it up!) also found its way into the virtual shopping basket - I'll look a bugger in that!

So what pieces of essential kit were sorted today? Well I've been wondering what to do about my iPhone - the battery life is way insufficient to see me through a festival, and I don't want to run the risk of losing it. Solution? A cheap, basic 'pay as you go' phone for £7.95 and £10-worth of airtime....with a stand-by battery life of 18 days! Also, it's on the Orange network, the festival's 'official partner', so you'd expect reception to be pretty good as well.

Next, I had a look at the mattress options. I've lent my airbed to Son No 2 for his camping trip this weekend, and kind of thought he might want to keep hold of it. I also thought that something a little less bulky might suit my needs better so I had a look at some self-inflating camping mats. I couldn't decide how suitable they'd be just looking at pictures on a screen, but noticed that the camping warehouse was actually based in Bootle, so decided to take a trip out there. The upshot? One double-size self-inflating mattress (I like to spread out) with matching pillow. Now although this is actually bulkier than the airbed, it does compress into a more manageable package and should be more convenient to set up, inflate and cart around. That's the theory, anyway. 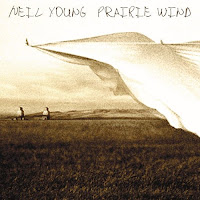 Back home, and onto iTunes to convert the Glastonbury itinerary into the 2009 Glastonbury playlist. Given the nature of the lineup this year, I expected this to be a biggie, and so it proved - loads of Bruce and Neil Young bulking out the playlist to a massive 2,400 tunes (compared to 1,900 and 1,300 last year and the year before). So plenty of listening to be done between now and the festival itself!

And purely through happenstance, it's Neil Young on the soundtrack today. Prairie Wind is one of his more recent, and mellower, albums, recorded essentially live and launched through a live performance in Nashville (at the Ryman, home of the Grand Ole Opry) captured on Heart of Gold. Both the the album and the DVD are worth a listen/viewing, sparkling performances and great tunes. Excellent supporting band, including Emmylou Harris, who seems to get better (and prettier) with age.

Here's the trailer for the 'Heart of Gold' film, directed by Jonathan Demme and available in Fopp last time I looked for the giveaway price of a fiver. Go on, fill yer boots!