Dressed up to the nines today, as I had to go into Manchester to do some work. Unpaid, unfortunately, but valuable and worthwhile all the same.

Whilst in my previous job, I took on a couple of Audit Committee memberships on a 'co-opted' basis for two Universities, one on each side of the Pennines. Today I had a meeting on this side of the Pennines, at the Royal Northern College of Music. I have sat on the Audit Committee for, oh, three or four years now, and have enjoyed every minute of it. The commitment is not too onerous, three or four meetings a year, coupled with review of all the associated Committee papers. When I was made redundant, I made it clear that I wanted to retain the roles - mainly because I enjoyed the involvement, but also, if I'm honest, because it keeps me in contact with some key professionals and it looks pretty good on the CV.

So this morning was spent reacquainting myself with the paperwork and then driving over to Manchester for the meeting, preceded by a sandwich lunch. The meeting itself passed without incident and I was home for four. Very civilised. And also very pleasing to get out into a 'work' environment again and to confirm that my brain has not turned into mush over the last 80 days.

Given my interests, the RNCM is the ideal institution for me to be involved with. One of a small number of conservatoires (ie dedicated music colleges) in the UK, it has a very strong (and justified) international reputation. Recent building work at the college has extended its teaching and rehearsal spaces considerably, and its two primary concert halls are of the highest quality.

More than a teaching college, the RNCM puts on a full programme of performances annually, showcasing both its own students and also putting on external performances to utilise the performance space efficiently and to generate further income for the college. Whilst I don't get to as many performances as I would like, those I have seen have been of a remarkable standard and I would commend them to you if you enjoy a spot of 'culture' now and again. Those of you who have been following my musical soundtrack will appreciate that my taste tends towards the 'uncultured', although there are quite a few classical pieces lurking in the depths of my collection and I do appreciate something a bit more cerebral from time to time. 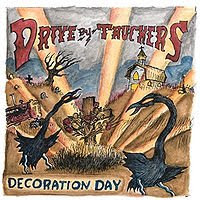 Nothing too cerebral today, although there's nowt wrong with a bit of alt-country now and again. If, indeed, that's what the Drive-by Truckers are. Some of their work veers more towards the 'Southern Rock' of Lynyrd Skynyrd and the Allmans. Whatever, genre is rather less important than the noise they make, which is most acceptable. Decoration Day is one of their earlier albums, from 2003, and was critically acclaimed at the time. Rightly so.

Here's the title track, performed live in Athens, Georgia back in 2003. Not a lot of country about this performance...

Ahh......DBT! One of my personal faves! I remember switching a certaim Mr Day onto this lot a year or so ago...

"A Blessing and a Curse" has got to be on my list of top ten albums of all time. The pinnacle of the Jason Isbell era.

Keep up the good work Paul!