Apologies for the slight break in service - must've been busy for the last few days!

No idea where Friday went - sitting here three days later I'm struggling to remember a single thing I did...which probably means I spent the whole day sat in front of the computer 'fannying about' for want of a better expression.

The computer gets a fair amount of hammering in our house, largely due to me it has to be said, and is beginning to show signs of wear and tear. It occasionally decides to freeze on us, and has a tendency to present me with the 'blue screen of death' and turn itself off from time to time as well. It has also started to show graphical problems on occasion when I turn the thing on, with "artifacts" (which I think is the technical term) appearing on screen. This can be fixed using the 'turn it off, then turn it on again' technique that has served me well over the years - but for how long? More worryingly, one of the fans inside has begun to make a horrible whining sound and to spin more slowly than it should. The thing seems to be welded to the motherboard as well, so may not be easily replaceable. I've picked up another fan to mount inside the case for a fiver, but don't think this will be a long term solution. We'll see.

Son No 1 had another interview in Bristol on Friday - not yet heard whether he's through to the next stage but good experience nonetheless.

Off to Huddersfield on Saturday to pick up Son No 2 and bring him home - Doves in Delamere Forest! Every summer around this time the Forestry Commission put on a series of outdoor concerts in the middle of the woods. This year, Doves are sandwiched in between Paul Weller on the Friday and Katherine Jenkins on the Sunday. Two years ago I went to see The Feeling there (I know, I know) but gave it a miss last year. A shame, because I missed out on seeing Elbow and I Am Kloot, both bands I was lucky enough to see later in the year anyway but it would have been a grand night out.

As it proved to be on Saturday. The forest is quite literally on our doorstep, but unfortunately there is no direct walking route from home - otherwise we'd walk. So there is a need to drive round three sides of a square and park up - a three minute drive, followed by a ten minute walk from the road to the stage. 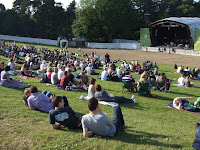 Interesting dynamic at this concert - it's all very middle class and comfortable, parties taking tables, chairs and hampers. It's the only concert we've ever been to where the arena fills up from the back as people stake out little campsites with their rugs and such, leaving a big empty space in front of the stage.

So naturally, after a beer and a baguette we took up position on the barrier at the front. 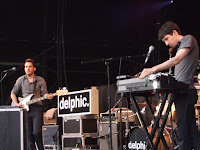 Support band were called 'Delphic', a Manchester band in a kind of New Order/Klaxons style - lots of synths and sequencers combined with traditional guitar, drum and bass. And pretty good they were too - a short (30 minute?) set with individual songs running together. Not the most 'visual' of bands, especially when playing with their synths (oo-er missus) but not a bad way to spend half an hour. 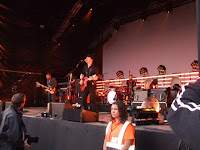 By the time Doves came on, the space in front of the stage had filled up to an acceptable level and a bit more atmosphere was being generated - even some half-hearted crowd surfing a bit further along from us. Good band Doves - and they put on a good show with a decent number of encores and all the 'hits'. They are on in the second headliner slot at Latitude so will definitely catch them again. 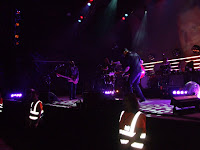 I've recently said nice things about their new album, 'Kingdom of Rust', which is definitely worth your consideration. Nice bunch of blokes too.

So Sunday was largely taken up with a trip back to Huddersfield to drop the boy off, and with the conclusion of the first series of 'The Shield', again something I've talked about recently in glowing terms. The climax of the series didn't disappoint either - so now on the lookout for Series Two. Still got a couple of boxes of CSI and The Corner to watch though.

We also started to catch up on Celebrity Masterchef, which is a bit of a guilty pleasure for Mrs W and myself. Cooking doesn't get tougher....

Speaking of which, the second attempt at bread rolls was a resounding success on Saturday. This time, I progressed to a 'wash' with beaten egg and a sprinkling of grated cheese on top before baking, which gave a nice savoury tang to the crust. And hot from the oven, split and filled with grilled bacon, they were a joy. 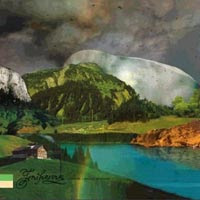 Jeniferever - you've never heard of them either, have you? Great name though, you have to admit. Swedish band, although they sing in English, in a style most closely reminiscent of Sigur Ros without being as 'otherworldly' as their Icelandic counterparts.

'Choose a Bright Morning' is their first full album, released in 2006. It has recently been joined by Spring Tides, and both are worth a listen. Not on the festival circuit this year as far as I can tell, which is a shame.

This is 'Alvik' from Choose a Bright Morning.