Not the most restful night's sleep last night if I'm honest, young Pedro deciding to venture upstairs and join us. And whilst he was extremely lovable and affectionate, he purrs when he's happy. Loudly. And I've already mentioned his bowel problems, which means we have to add fibrous supplements to his food.

This makes him fart. Not loudly, but my God. They smell. Badly. Oh, and on occasion, they are slightly liquid.

Too much information, I know.

Despite the above, I was out early today, to do the weekly shop. I'm getting good at this - shopping list set up on the iPhone (yes, there's a specific application for just that), early start while it was quiet, 'bags for life' taken with me, logical progression up and down the aisles - and only one or two 'little extras' thrown into the trolley from off-list.

Today's shop was made for me by a really nice checkout lady who paused to have a long chat with me about the quality of Sainsbury's own brand gin compared to Gordon's, her tipple of choice ("but only at weekends, I'm not really a drinker - unless my sister's about"). I was happy to tell her that the Sainsbury's brand (actually from their 'taste the difference' range, I think - ie it's supposed to be decent quality rather than cooking gin) is a winner, robust and tasty with tonic and a slice. 43% alcohol compared to Gordon's rather pallid 37% as well.

It helps when the supermarket is quiet, but being able to take time to have a chat like that makes such a difference to the quality of the 'supermarket experience' and it was very pleasant. In retrospect i wish I'd clocked her name and dropped the store a line. If only as a counterpoint to Mrs W's 'Ann Robinson' approach to supermarket correspondence...although to be fair her latest missive about 'tough steaks' to Sainsbury's did result in a £12 gift voucher. It was the steaks, of course, not the chef, that was the cause of the toughness...

Stayed out after the supermarket sweep to wander round Cheshire Oaks. Leisurely coffee and muffin, then round the stores. With Glastonbury approaching, my annual trawl to find the ultimate in camping/festival wear/gadgets is on. Today I picked up some new tent pegs to replace those lost/bent, some aluminium "water" bottles (which are unlikely ever to be filled with water, let's be honest) and a big bum bag-type affair with two holders for said bottles and enough space for cameras, torches and the paraphernalia you need to carry round all day.

Back home, and after a bit of umming and aaahing, I went out and exercised my democratic right to vote. I was sorely tempted to exercise my equally democratic right not to vote, or to go and write 'none of the above' at the bottom of the ballot paper, but in the end I did my civic duty. How sad to see the BNP at the head of the ballot paper, along with other charlatans trying to drag the country down a route of hatred and isolationism. And how sad that I could find no enthusiasm at all to vote for any of the major parties, who have proven themselves to be morally and intellectually bankrupt in recent months (and years). I did find a party I could vote for on the long list however. A wasted vote in all probability, but a vote I could make and remain relatively true to my own conscience.

And no, it wasn't the Monster Raving Loony Party either.

Had a second go at pizza tonight, and it was a distinct improvement on the (actually pretty successful) first attempt last week. I'm a lot more comfortable handling the dough, and got two almost round discs of dough that were relatively equal thickness throughout. I also got the toppings right this time, so that the ratio of sauce to dough didn't cause everything to turn into a soggy mass but still gave the right amount of tomatoey taste to the pizza. Yum!

Pizza downed in front of The Shield, which is our current DVD box set of choice. Can't remember if I've mentioned The Shield before, but whilst it's not The Wire (what is?) it is both entertaining and intelligent. A hugely unsympathetic main character, who still manages to have you rooting for him through the twists and turns of his personal and professional life. Wonderful stuff and highly recommended. Think there's a good few series to get through so will keep us going for a good while yet. 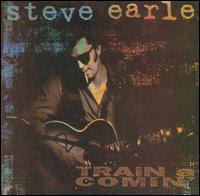 Soundtrack today - Steve Earle, continuing the alt-country flavour introduced yesterday. Train a-Comin' is one of Steve's more rootsy offerings, and none the worse for that. Steve Earle himself is a fascinating character - married any number of times, through a range of addictions and a prison term, coming out the other end a (hopefully) wiser and stronger man. And he had a decent role in The Wire as well. Strongly political, and not afraid to rail against Southern orthodoxy in his views and his songs. Redneck he's not.

Less political, and recently used to sell cider, I give you Steve performing 'Galway Girl'. Just because it's a great song. Love this performance as well.