A very busy few days in fact! Main job today (after signing on) was to drive over to York for an Audit Committee meeting at the second of my two Universities, York St John. YSJ (as it will henceforth be abbreviated) is a relatively small (and new) University, on the edge of the city that grew out of two teacher training colleges that date back to the 19th century. After developing close links with Leeds University as early as 1920, it became a full college of the University in 1990, achieving its own university status in 2006. It now has four faculties; Education & Theology, Business & Communication, Health & Life Sciences and Arts.

The compact campus has a nice mix of old and new buildings, and recently opened a new facility extending the University's capabilities even further.

Right, that's the advert over, how was the meeting? Well very successful really, I managed to persuade management and the auditors to effect some specific changes to the plan for the coming year that I thought were necessary, and by close of play (at around 6:00) it felt like we'd covered a lot of ground diligently and productively. Naturally i took the opportunity to talk to the auditors about my situation - just so they know if they are looking....

Left the meeting to find out that Son No 1, on his way up for his second interview in Manchester, had broken down and was awaiting 1) the AA and 2) his mother, so he could transfer cars and continue his journey in his mum's car. More news on the outcome of the interview process tomorrow - suffice to say I am more nervous for him than I have been for any interview of my own, and far more nervous than he is. He's surprisingly (I hope not too) calm about the whole thing!

Chippy tea tonight, for convenience and, well, because sometimes it's just what you need. We've a few local chippies, none of which are perfect, but the fish tonight was especially good. Pedro agreed too. Chips could have been better, mind. 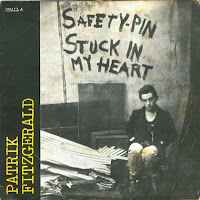 Punk poet Patrik Fitzgerald on the soundtrack today. One of the more unusual backwaters of the punk revolution was the emergence of a number of 'punk poets' - the estimable John Cooper Clarke probably the most famous, but there was also Mark Miwurdz (see what he did there?) in Sheffield, Attilla the Stockbroker and the aforementioned Patrik Fitzgerald amongst others. In Reggae, artists like Linton Kwesi Johnson and Michael Smith came to the fore, and in the States Patti Smith and others brought poetry into the punk arena.

Anyway - Patrik Fitzgerald. I kind of lost track of him after his first three eps, on the Small Wonder label, but his Wikipedia page suggests he's had a long and varied career without ever troubling the mainstream. I bought his first two records, Safety Pin Stuck in my Heart ("a love song for punk music") and Backstreet Boys, the title tune of which perfectly captures the violence and paranoia of the era.

Here's 'Safety Pin...' with some images from the era. Ok, the guitars a bit shaky and the vocals a bit wobbly, but the charm is self-evident...to me anyway!