Off to Manchester today for a couple of reasons - Son No 1 had his second interview for his job, and I had a meeting with one of my ex-colleagues about a potential interim role that might arise from some work they have been doing.

Dropped Son off at his interview location and wandered across town to Spinningfields, where my old firm has just this week moved to posh new offices. I got down there and realised I didn't actually know which building they were in, but eventually found where I needed to be. Very pleasant new surroundings from what I could see - and I hope the move has not impacted adversely on the cost savings they obviously had to make three months ago(!) - would hate to see further personnel fallout as a result of an unfortunately-timed move to new premises.

Walking across town, I managed to get drenched to the bone as rainclouds gathered, and unloaded, over Manchester. Hopefully this will get June's required rainfall out of the way this week, leaving next week dry and sunny so I can sit in a dry Somerset field chillin'! 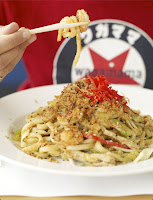 Met up with my ex-colleague, who I'll call Mark (since that's his name) and we hot-footed it down to Wagamama for noodles and a chat. Very interested in the project he described to me, and I've confirmed he can put me forward as a potential candidate for the proposed 'troubleshooter' role when they present their report at the end of the month. Obviously can't say any more than that at this stage. Delighted they are thinking of me, and shows the benefit of not burning your bridges.

My first time at Wagamama, and enjoyed it a lot (although Mrs W had something to say about the resulting garlic breath). Spicy noodles, chicken, duck dumplings (which were ace) and some 'black' Japanese beer went down a treat. Couldn't finish my plateful, which as many of you will appreciate is not typical Waring behaviour!

Wandered back into a (slowly drying) town centre, to get a text from Son No 1 that his assessment would continue until 8:30 in the evening at the earliest, so headed back home, planning to pick him up later.

Duly drove back into Manchester for 8:30, and (after a few 'holding' texts, finally picked Son up at around 10:15. After a long and intensive day - the process started at one o'clock, he'd been given the news that he'd passed the assessment and had the job, if he wanted it. Which in itself is great news, and I'm proud of him for having the drive and initiative to go out looking for work well away from his current Southern base. What he has to do now, on the back of what he learned today, is decide whether the proposed role actually reflects what he wants to do and is a role he will be comfortable with going forwards. And if, after due consideration (and discussion with friends and relatives) it is something he wants to do, then we'll support him all the way.

Downloaded the latest version of the iPhone software this evening, and my phone can now do all sorts of wonderful things like...send picture messages! And support cut and paste! And record voice memos!! All things of course, that cheaper, less trendy phones have been able to do for years.

It's still ace though. 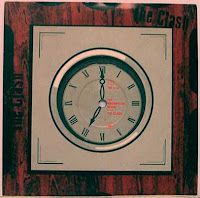 Got The Clash back on the soundtrack today - I'm sure we've had them before. Today's waxing is a single from the 'box set' of singles, which includes each single released by the band in a facsimile of the original sleeve. The Magnificent Seven comes from Sandinista!, at a time when the group were diversifying into rap and other musical forms some distance from their original punk roots, and this single contains eight (count 'em!) tracks including a number of 'dance remixes' and dub versions of this and other tracks from Sandinista. Not all of them work, but the fact that the group was prepared to stretch itself and explore new avenues is one of the things that stands them out from the rest of the punk massive. a recent debate on the Word blog asked whether The Jam or The Clash were the better band and, while they were both wonderful, it was The Clash's desire to experiment and stretch, within the group context, that swung it for me. Paul Weller had to break up The Jam to realise his musical ambitions, he couldn't do it within that context. The Clash could.

Here they are in June 1981 performing The Magnificent Seven on the Tomorrow Show in the States. How good is this?