Sorry Kev, but it's not Depeche Mode on the soundtrack today either! 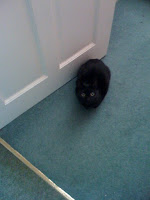 His name is Pedro, and he's the happy outcome of our search for the 'right' pet to brighten up our lives. Again, he's a rescue cat, resident at Paws Inn, the sanctuary I've mentioned before. Mrs W spotted him earlier this week when she went to visit, and after a quick exchange of emails and a long chat with Pedro's vet, we agreed to give him a home and I picked him up today.

Pedro will need plenty of TLC - he's got a bowel complaint that means he needs to eat a special diet, and we'll need to keep a close eye on his bowel movements to make sure they are regular and of the right consistency. 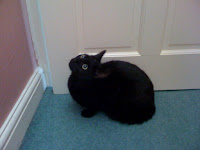 Apart from that, he's a lovely boy who is currently coming to grips with his new environment. This currently involves living behind the sofa - but in a couple of days he should be fine. Actually, when we first arrived, his first reaction was pure curiosity as he sniffed around the hallway and up the stairs. It was only after about ten minutes he had an OMIGOD WHEREAMI moment and got a bit agitated, eventually finding his way behind the sofa by way of 'behind the telly' and 'behind the door'.

Another factor that swung things in his favour is that he is (or has been, so far) very much a housecat - very important to us with the busy road outside.

So will keep you posted on Pedro's progress over the coming weeks!

In other news, some progress on the job front as I have a meeting with one firm now arranged for mid June, and a 'coffee and chat' confirmed with another firm in the next week or so. I would not class either of these as 'interviews' at this stage - any opportunities in the profession will be 'slow burn' as business cases and recruitment freezes need to be negotiated - but they are the first positive moves for some time and I'll be giving them my all.

More good news on the cup final front as our kid has managed to track down an additional ticket for Son No 2, so Team Waring will be nine strong on the day. The build up, day and fall-out will inevitably have an impact on posting, so there may need to be a bit of catch up early next week!

So the other Super Furry Animals. I like the SFAs more than I think I do, if that makes any sense. No? I think what I mean is that whilst I rarely actively seek them out to play, when they do come on the playlist (generally randomly, like today) I am always pleasantly surprised by just how good they are. They are very Welsh, and a bit unselfconsciously 'wacky', but in a good way.