Would have been good for The Searchers to come up on shuffle today, given the Day's title - but the title's got nothing to do with ageing Merseybeat bands and everything to do with today's major task - that of taking Mrs W into Liverpool for some treatment for her bad back - treatment that includes a combination of back massage and acupuncture! Yow!

Now I've never willingly let people stick needles into me, unless they are qualified physicians putting me to sleep before major (or even minor) surgery, no I'm not in any position to comment on the efficacy or otherwise of acupuncture as a treatment for back pain (or indeed any other sort of pain, but if it works for Mrs W, then it works for me.

The acupuncturist is based in the centre of Liverpool, just outside the new Liverpool One shopping centre I mentioned a few days ago. Now Mrs W is not the best of self-navigators, so I agreed to drive her into Liverpool and hang around while she was getting treated.

And why not? It's been a nice day weatherwise, I get out of the house and also get to see what this new part of Liverpool is all about. So I picked Mrs W up from work and we drove into town. Satnav instantly confused by the new road layout in the centre of Liverpool, so rather than fanny about trying to find my way round to the top of Hanover Street from the Pier Head, I just put the car straight into the Liverpool One car park. A very empty Liverpool One car park as it happens - where was everyone? 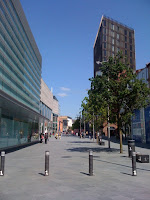 Exiting the car park, it turned out we'd actually pitched up just a few hundred yards from where we needed to be - good job, because Mrs W was walking like an OAP at this stage. I left her at the quack's and wandered back down to the main shopping area.

And pretty decent it is too. Anchored by a flagship John Lewis store, the newer part of the precinct has some interesting stores dotted around the place, in between the ubiquitous chains. A Lakeland that tempted me with some interesting cooking and baking kit, and a big music store (called Head?) that must have been a Zavvi up until very recently. I was very good though and managed to avoid temptation!

The precinct was very empty though, as my picture shows. This was taken at around midday, so it's not as if I was catching the place at its quietest - you'd expect it to be heaving. A sign of the times, or just because it's away from the main business area of Liverpool? Who knows. 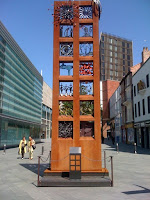 The entrance to Liverpool One from Hanover Street has this set of framed sculptures in place. The plaque you can see at the base of the frame describes each of the individual sculptures and what they are intending to evoke. The pieces are not really my cup of tea, but I thought it was a brave and intelligent piece of work to put in such a place.

So post-treatment, a (slightly eased) Mrs W was returned to her place of work and I went shopping for tonight's tea. A nice one tonight, a prawn stir fry using some really fresh and tasty ingredients. To wit, raw king prawns, garlic, ginger, chilli, red pepper, pak choi and spring onions, stirfried in sesame oil and seasoned with sweet chilli sauce, soy sauce, lime and a hint of fish sauce, before being tossed with some cooked, medium egg noodles and dressed with fresh coriander.

Not sure if you are familiar with fish sauce, or nam pla to give it its Thai name. It's made from fermented anchovies, and given that, smells as you might expect. A little goes a long way, shall we say. Happily, the smell dissipates on cooking, and it give a depth to the flavours in the dish. A bit like garlic, you may not like it individually but you'd miss it if it wasn't there.

Disappointed with the Smoggies' capitulation last night - with Hull almost begging to be relegated, it looks increasingly like Newcastle might escape this year. Drat! Also disappointed to see Preston knocked out of the playoffs - maybe next year? Let's see if Burnley can do anything tonight - be nice if they came up to the Premiership. Guaranteed six points there!

The Floyd on the soundtrack today - this is an 'audio rip' from the Live at Pompeii DVD using a nifty little piece of software called, remarkably, 'DVD Audio Ripper'. The concert, filmed in the old amphitheatre at Pompeii, captures Pink Floyd just on the cusp of becoming absolutely massive - ie just before the release of 'Dark Side of the Moon'. The rip is interesting because it also captures some dialogue with the group, not just the music, and includes early versions of tunes (and snatches of music) that found their way onto DSOTM. The centrepiece of the performance is a lovely version of 'Echoes', a side-long piece of music in its studio form that comes alive on the DVD.

Here's the first part of 'Echoes' from the DVD - the rest of the performance can be found close by on YouTube if you're interested.

Now "Live at Pompeii" takes me right back to being a teenager! A friend's parents had gone away and a group of us decided in our (youthful) wisdom to have an all night videofest (Betamax video as well!) fueled mainly by crisps and beer (definitely not to mention something that Grange Hill would have said no to according to their awful song...)

As the night progressed we worked our way through Spinal Tap, The Producers (a cult fav of the gang - by the way never seen the update or theatre version - Mel Brooks was our comedy hero!), the Whicker Man (another cult fav) and a weird 80s film "Into the Night" (we only watched it as it had a David Bowie cameo).

The gang thinned out through the night until only myself and the host (still my best mate and best man at my wedding) were left standing (or to be more exact sitting!). He then put on Live at Pompeii at about 5am and this finished me off. I kept slipping in and out of consciousness to wake each time to the sight and sounds of the Floyd in an Roman amphitheatre - a very surreal finish to a strange never to be repeated evening!

Thanks for bringing back the memories Paul of my long forgotten youth!!!