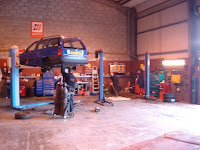 Into Manchester this morning, to get the car sorted out with its MOT and to make the decision as to what I'm going to do with the thing at the end of the month. An early start, the intention being to have the MOT 'while I wait' and then get off and do other things. It didn't quite work out that way, for some reason the traffic was very light and I got to the garage about half an hour before testing would start. 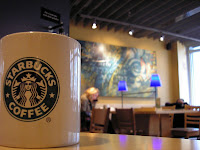 So I trotted off into the city centre and found a quiet Starbucks, settling down with a chocolate muffin and a cappuccino for some early morning contemplation. Well I thought it was going to be quiet, sat in the corner away from the other customers. However I hadn't allowed for the couple sat right at the far end of the cafe, a good fifty feet away. She was the smart business woman type, pinstriped suit, hair up, mobile phone and notepad. He was a scruffy bloke in his mid-50s, long hair but balding, overcoat and knackered Converse (but no tracky bottoms tucked in socks, Matt!). Surprisingly, he works in the fashion trade. I know this because he was extremely vocal about this. He managed to keep up an incessant (and one-sided) dialogue with his companion, mainly to do with the cut and colour of a number of dresses he was designing or selling. I'm not sure his companion managed to get a word in for around half an hour, until she made a call on her mobile - which was itself constantly interrupted by instructions and comments from our friend. Eventually he could stand it no more, taking the phone and continuing his tirade with the hapless person on the other end.

Certain candidate for a heart attack I feel, and the whole thing was actually quite diverting in a strange sort of way. Sadly, coffee drained, I had to get about my business, leaving the pair to continue their (rather one-sided) meeting.

Strolled around town for a while, browsing but not buying, too apprehensive about what the garage was going to sting me for to splash out on anything. In the end, my mobile rang and the news was much better than I'd feared - the car had passed the MOT...just - brakes were getting very worn and one tyre was close to the legal limit. A sigh of relief then - told the garage to change the brake pads and not to worry about the tyre (I'll worry about that when I absolutely have to).

So with the car MOT'd for the next twelve months, and with the brakes sorted, I'm going to buy out the lease and keep hold. If I need to sell, then I will, but in the meantime I'll retain my wheels (and my independence!)

Back home for the weekend then, with tonight's tea to worry about (tea rather than dinner - in Waring Towers we have breakfast, dinner and tea. Always have, always will. Breakfast, lunch and dinner is for posh people).

And supper is something you have before you go to bed. Probably in your dressing gown. It is definitely not something that people get invited round to!

So with some mince out of the freezer, what's it to be? Not Shepherd's pie I'm afraid Mark - we're having a chilli tonight. 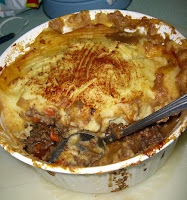 But here's my recipe for Shepherd's pie anyway. Or Cottage pie. The distinction is marginal - basically the same recipe, but lamb mince in the first, beef mince in the second. I think the original source for my version is a Madhur Jaffrey recipe, hence the hint of spice in the sauce, but I can't be sure.

Anyway. typically cavalier approach to quantities/measures etc, if you're any good you'll know what works for you.

Firstly the meat. Fry off a finely chopped onion or two in some olive oil until soft and beginning to brown. Add chilli powder to taste - enough to give it some bite, but not enough to blow your wig off, if you know what I mean. Add you meat, and continue frying until browned. Add your choice of vegetables - I tend to go with carrot and celery, and Mrs W would lynch me if mushrooms were not involved - and cook through. A bit of herbage would not go amiss either. Then add tomato puree, and then lots more tomatoey goodness - I would tend to add a carton of passata and/or a tin or two of chopped tomatoes - and a beef oxo for additional meatiness. Simmer for as long as you've got, reducing the liquid so you have a thick sauce - too runny and your potato won't sit happily on top.

While your meat is cooking, boil your spuds for the mashed potato topping, as you would for your normal mash recipe. The key thing for Paul's Shepherds pie though, is the addition of a healthy handful of grated cheese - a good mature Cheddar or some Red Leicester for me.

Transfer meat to a deep Pyrex dish or equivalent, and top with your mash. Use a fork to smooth out the mash. generating a lot of narrow ridges to crisp up in the oven. Sprinkle with a bit more grated cheese and stick in a ridiculously hot oven for twenty minutes or so for the topping to brown and crisp up (everything should be fully cooked when it goes in, so all you are doing is keeping it warm and browning the top, really).

Serve with something green and enjoy!

Almost makes me wish we weren't having a chilli now, but I do enjoy my chillis. Not going to give you the full recipe - but the 'secret' ingredient you absolutely must put in your chilli to make it really tasty and authentic? I didn't tell you this - but a teaspoon of cocoa powder stirred into the chilli for the last five minutes' cooking time will transform an average chilli into something monumental. Oh, and use cumin powder as well as chilli powder to give some depth and complexity to the flavour. 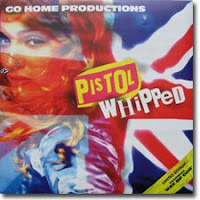 Today's soundtrack is a 'mash-up' of tunes produced by Mark Vidler, the man behind Go Home Productions. For those of you who aren't hip to the groove, 'mash-ups' are combinations of two or more existing tunes, to produce something that (hopefully) transcends the originals. Many mash-ups are pretty poor, but some are surprisingly good, and Go Home Productions are consistently better than most. Most are unlicensed (and therefore, technically, illegal) but some 'official' mash-ups have been released. Many, many more are downloadable from the producers' websites, including the Go Home Productions site here.

Today's soundtrack includes 'Ray of Gob', an inspired mash-up of Madonna's 'Ray of Light' and the Sex Pistols' Pretty Vacant'. Sounds unlikely? Well judge for yourself:

speaking of distractions and that in public places, was in kfc in town the other week with emma, happily working my way through a boneless banquet for one, when i noticed an admittedly scruffy looking couple, small child in tow, having a bit of an argument. It seemed to be getting worse as voices were raised and tables were banged, all by the gent, until the woman decided 'fuck this' and got up to go with her kid. the guy then got up to his feet, picked up his drink and threw it over the woman before storming out!!