How did that happen?

Last time I looked, I was about 25, the kids were but a far-off twinkle and Everton were winning league titles! Where did the time go?

I'm not happy about this. Who do you complain to?

And at what point do you have to start acting like a fifty year old? Do I have to start wearing a shirt and tie (under a pullover, natch) at the weekend? Blazer and slacks? Do I start having to find merit in the musical works of The Mike Sammes Singers?

Bugger that. I shall continue to grow old disgracefully and embarrass my children. It's what they would want.

More on that later, no doubt. You all want to know how the interview went, don't you? Well, I don't know yet, but overall I was pretty pleased with my performance on the day.

So I turned up at the appointed place, 9:00 in the morning, appropriately suited and booted. Me and five other people cautiously eyeing each other up in the reception area. Amusingly, for an organisation that would make great play of its commitment to equality and diversity, it was six white, middle class men sat there for the day's entertainment. 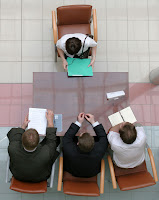 The format of the day was basically as follows. Two exercises in the morning - a written paper, and a 'stakeholder interview' in front of a panel of three. Lunch, during which our performance in the morning would be assessed and the six of us would be whittled down to three, X-Factor stylee. Then for the remaining candidates, preparation and delivery of a presentation to a second panel of three, followed by a final interview by that panel.

Following introductions, my instant reaction was that there were two candidates I would have immediately backed to make the final three, leaving me competing with the rest for the last place in the final. So after the morning's work, I was pleased to see that it had panned out as I had hoped/expected - I did make the final three, along with the two initial 'favourites'. 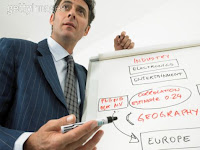 I was 'first on' in the afternoon, given 45 minutes to prepare my presentation (paper and flipcharts - no Powerpoint...what's that all about?) and left alone to prepare. It was a relatively easy topic for me to address - the challenge was getting my presentation down to the allotted time. Eschewing the flipcharts, I went for a straight narrative presentation and, although I overran slightly, thought I did ok and got my main points across. The rest of the interview went well from my perspective, and I was out of the door and on my way home by three o'clock.

Did I do well? Yeah, I think I did. Did I do enough? Well I'll find out on Tuesday. Not holding my breath - I suspect it was there for one of the six candidates to lose...and I'd be surprised if he wasn't given the nod. If for whatever reason he wasn't the preferred candidate, I'd be disappointed not to get the job. But we'll see (and if the above sounds a bit cryptic, I'll explain more on Tuesday....)

After insisting to anyone who would listen that turning fifty (fifty! Jeez...!) was not a cause for celebration, and that surprise parties would be frowned upon, Mrs W and I had a quiet night in in the company of Mr Gin and Mr Tonic, with a Chinese takeaway and a bottle of red to follow. And, it being a Friday, a very dodgy film, enlivened only by the presence of Modest Mouse on the soundtrack which was a bit of a surprise.

(Modest Mouse - relatively obscure American indie band. The sort of band no-one over fifty should be listening to). 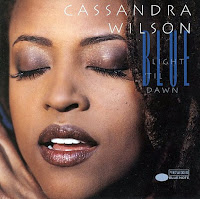 In keeping with my advanced years, we have some cool jazz on the soundtrack today. I don't actually know an awful lot about Cassandra Wilson, but the few albums I have of hers are ideal for those times when you just want something smooth and relaxing on in the background. That's not to say it's easy listening - it's not, the arrangements are sometimes complex and the vocals compelling - but it is music perfect for those contemplative moments last thing at night or first thing in the morning. Her choices of cover versions are sound - this album includes tracks by Joni, Van and Ann Peebles, amongst others - and her interpretations are interesting.

Here she is doing Neil Young's 'Harvest Moon'. Some lovely guitar work at the beginning of this piece as well.

"Less recipes and more bass-playing stories!" they demand. Well, I've been a bit tardy on both fronts really. But as far as the bass playing is going, it's not really something to brag about - yet! Still finding my way around the fretboard, and tinkering with riffs plundered from the internet. Great fun, though I won't be challenging Mark King for the Level 42 gig anytime soon. That Adam Clayton though, I could have him tomorrow.....

Oh, before I forget, thanks to all for your birthday wishes and 'good luck' comments for the interview - despite me being a grumpy old get, it really is much appreciated and good to know people are thinking of me...ta muchly all.
Posted by Paul Waring at 9:01 am

Cripes! You old bugger. My motto is also to grow old disgracefully - it's the least we can do to our children.

When I was 50 I took 50 friends out for a chinese meal. Cheaper than my first option of hiring avenue and live band. Mind you, it was before my redundancy occurred so I had better start saving now for 60...

As a young 'un in Leeds I went for an inteview where all the candidates were put up in a hotel overnight and went through exercises over 2 days. It turned out that nobody was bothered about the job but they all fancied a free night at somebody else's expense. Don't even know if anyone got offered the job.