Well what a nice day - sun shining, and warm if a bit breezy. How to spend such a day? Well, I had another meeting with a recruitment consultant - this time in Leeds - so I spent most of the day on the M62 for my sins.

Hopefully worth it though. A sensible time for the meeting meant that I avoided the inevitable early morning logjam on the motorway, which was pretty clear (in my direction) both into and out of Yorkshire. Big jams in the other direction both journeys though - just a lucky day on the roads for me today.

And hopefully the luck will continue onto the job front after today's meeting. I've used this agency before when I've been recruiting and they've delivered the goods - and the feeling I got coming out of the meeting today was that this particular agency would be a touch more proactive than others. Now it doesn't matter how proactive they are, if there aren't any jobs out there - but I did get the impression they would push hard, and in the right direction. We talked around some very specific target firms and companies and, whilst there may not be specific roles to discuss with them, I'm sure they'll get my name out into the marketplace, to be picked up upon when the roles do start to appear.

So home, doors and windows flung open to get some fresh air in, breadmaker on and off to Middle Earth to slay a few more goblins, in between updating the blog and trawling the job sites. No need to worry about tea tonight - there's enough pasta bake from yesterday to keep us going tonight. That bolognese is the meal that just keeps giving! 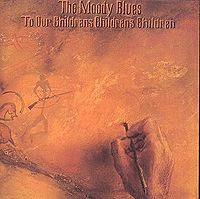 I'm typing away to the sound of the Moodies, a bit of prog from 1969. It all sounds a bit whimsical and twee now, but in the early '70s the Moodies were up there with all the big 'album bands', mixing a bit of (awful 6th-form) poetry with sweeping soundscapes, Mellotron prominent. As with many of their albums (and many other albums at the time), To Our Children's Children's Children is a concept album, this concept loosely based around space travel (the 1969 moon landing being a key inspiration, apparently) and, somewhat unsurprisingly, the innocence of children.

No wonder we needed punk to sweep all this nonsense away!

Actually, that's a bit unfair - buried underneath all the bombast and orchestration there are some decent tunes trying to get out, but overall it is very much 'of it's time' and allowances have to be made.

So here they are in 1970. Very very dodgy haircuts and facial hair. Tie-dyed jeans! And a flute! How un-rock is that! And the audience are sitting cross-legged on the floor!

Labels: Lord of the Rings, recruitment, The Moody Blues

in leeds?? you should have stopped by for a visit on yer way back!

Indeed I should - didn't want to disturb your revision though! ;-)

All set for tomorrow?