Doesn't time fly when you are enjoying yourself? Although I'm not sure what I did that I enjoyed so much - today has just flown by for some reason.

Started by getting myself off to the favoured supermarket for the bank holiday shop. Nice and early, nice and quiet and back home before half nine. Had to buy a copy of 'Cheshire Life' (Sainsbury's having cunningly shrinkwrapped this month's edition to stop me flicking through in store) to see if the girls were in - see Day 44 for details - but unfortunately in what is obviously a bumper month for the social whirl they failed to make the cut.

Unpacked the shopping and checked the post. Confirmation of no claims bonus had arrived, so I wrote to the new insurers as requested and wandered up to the post box.

Engaged in some gentle banter with ex-colleagues over email regarding a little quiz I'd set them (What are the names of the eight footballers who have won both the Premier League and Champions League but have never played for ManYoo?*).

Logged on to Middle Earth, killed a few more goblins and orcs, and all of a sudden it was lunchtime.

After lunch, fannied around with Windows 7 for a while (it really is very good I have to say, even on a pretty underpowered netbook. Video and audio performance much better than when using Ubuntu). Downloaded lots of free, (and legal!) software, set up and tested email and Skype and generally tinkered.

No wonder the day flew by.

Then started preparations for tonight's tea - spaghetti and meatballs.

Ooooh! You'll be wanting the recipe, then! 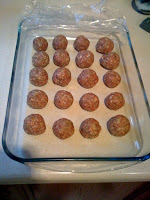 Ok - here you go. Take a pound of mince (500g if you want to be all metric) and stick it in a bowl. Add seasoning and dried herbage. A dash of Lea & Perrins. Grate in a small lump of parmesan (this is a new variation - not done this before). Using a whizzy choppy thing, finely process a small onion and a couple of cloves of garlic. Add to the bowl and mix thoroughly. Whizz up a slice of bread into breadcrumbs and add this to the bowl and mix again. Finally add a raw egg to the bowl and mix thoroughly. You should now have a sticky meaty paste. Using (clean) hands, pick up small lumps of the paste and roll into balls - try and get the balls about an inch in diameter. This should give you around 20 meatballs.

Stick them on a tray, cover in clingfilm and leave to chill in the fridge for a couple of hours. This should stop them falling apart when you cook them.

When you're ready to cook, bit of olive oil in the frying pan and heat up to very hot. Add your meatballs in batches so they can move around the pan easily. When cooked. return to the baking tray and keep warm while you cook your sauce.

Using the same frying pan (thus cooking in the juices from the meat) fry off some more chopped onion and garlic. Add some bacon or pancetta if you want. Then add some passata and chopped tomatoes (tinned or fresh) to the frying pan and simmer until the sauce reduces to a nice, sweet, thick consistency. At this point stick some fresh basil leaves in the sauce, add your meatballs and heat through on a gentle heat while you cook your spaghetti.

Spaghetti cooked, stick yer balls on top and add sauce to taste. Grate more fresh parmesan on top, grind some black pepper on top and serve with garlic bread (it's the future) and a lovely drop of red. 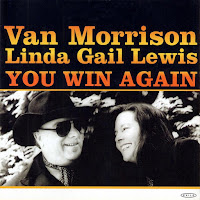 Although he's a curmudgeonly old bugger, I really like Van Morrison. Famously erratic live, I caught him on a good night a couple of years ago and loved every minute. As well as his solo stuff, he occasionally collaborates (his album with The Chieftains is fantastic) and this album is a duet with Linda Gail Lewis, sister of Jerry Lee Lewis. Its a good (if not great) album, mainly covers (only one Van original) and sounds like it was bashed out in a series of single takes. Which is actually a good thing in this case, giving it the air of a live performance. Not essential by any means, but Van and Linda sound like they are enjoying it, so why shouldn't we?

All Van's stuff on YouTube seems to be locked down and watermarked by his record label so no videos today, I'm afraid. Not like Van to try and control all his output, now is it?