No, it's not a result, or even a bit of wishful thinking. Everton are finally getting round to opening a 'flagship' merchandise store in the City Centre - actually in the newly remodelled shopping area in the centre of Liverpool. I understand that the store will be called 'Everton 2' (the original megastore up by the ground being renamed 'Everton 1', you see). Those of you from the area will know that the new shopping centre has been renamed 'Liverpool One'.

Do you see what they did there? I think that is genius.

Anyway, where were we? Let's get the soundtrack for the day out of the way as it follows on quite nicely from the above. I have no idea where I got the above album from, it must have come free with a magazine or something, but it's as good a freebie as you could hope for - basically a set of songs covered - or performed - by various artists from Liverpool. I'm currently listening to Ian McCulloch singing Leonard Cohen's 'Suzanne'. The album also includes Shack performing 'A House is Not a Motel' originally by Love, and the great Pete Wylie performs his own 'Heart as Big as Liverpool', one of my favourite songs about the city. Great stuff.

Living were we do, and working (when I do work!) for the most part in Manchester, I don't get into Liverpool as much as I used to - other than for the match, which is out of the city centre - but when I do go, I still get more of a buzz out of the city than just about any other.

I don't want to over-romanticise it, but there is just something about Liverpool that I don't 'get' about Manchester, Leeds, or any other big equivalent northern city. Not sure what it is - it might be the river, it might be the Pier Head and the Three Graces - but Liverpool remains special to me.

I should go more often.

After the exertions and stresses of Friday, we spent the day doing very little, actually. The day started with me feeling like something had crawled into my mouth and died...nothing at all to do with the previous night's bottle of red, I'm sure...so it took a gallon of coffee, a litre of Resolve and a lot of time to start feeling vaguely human again. 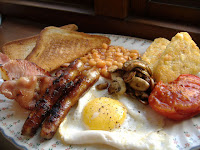 What really sorted me out was brunchtime though. Plans to have a quick sausage sandwich turned into a full-scale fry-up...bacon, sausage, double fried egg, hash browns, beans and fried bread...just what the doctor ordered!

Suitably regenerated, we drove off to see the parents, who were looking after my brother's dog, Alfie, while he and his family were away at a football tournament in Blackpool. Now I'm not a doggie person, and Alfie, although a perfectly well-tempered dog, does have a tendency to get overexcited and jumpy-uppy, which doesn't do it for Paul.

Mrs W, in contrast, was in her element, and happily fussed and played with Alfie while we were there, rolling round on the grass (that's Mrs W, not just the dog) in complete disregard for dignity and without a care in the world. And why not? It was good to see and Alfie now has a soulmate for life! Daft as each other, if you ask me.

Home, and enchiladas whilst watching a surprisingly good little film called 'The Children' - a British film about two (related) families celebrating a snowy Christmas together. Things take a turn for the worse when the kiddies start getting infected by some form of virus that turns the little darlings into psychopathic killers.....mayhem ensues....

I know, I know, but trust me, it had some genuinely creepy and shocking moments. Not Oscar material (obviously) but good fun for an hour or two.
Posted by Paul Waring at 8:50 am

Happy 50th birthday Paul! I will buy you a beer or two at Lattitude to celebrate.

Fingers crossed for the job.