Day 51: Back to the Drawing Board 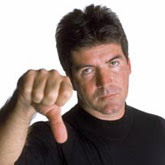 Well, got the call I was expecting this afternoon - didn't get the job I was 'assessed for' on Friday - the job went (as I expected) to the guy who has been filling the role (successfully, by all accounts) on an interim basis for the last nine months or so. In most sectors, I'm sure the job would never have been advertised in the first place, but in this specific sector, they would have to be seen to be operating a fair and open recruitment process. And I'm sure they did - but I suspect it was always 'his to lose' and all things being equal, so long as he did not screw up badly on the day, he had to be favourite.

I don't mind that - I know what I would have done in their position - good luck to the lad. I'm just pleased to have made it through to the final three and at least, I hope, given them something to think about.

So onwards and upwards - we move on to the next opportunity and see where that gets us. Chin up lad!

Earlier in the day, I had the joy of signing on again. Not a problem really, but it's a chunk out of the day at an awkward time of the day - right after lunchtime, splitting the day in two. Still, it's half an hour once a fortnight, so not a massive imposition really. And it does act as a spur (as if I needed one!) to get myself out there and actively looking for the next role.

So this morning was spent doing the jobsite trawl. It doesn't take long really - the only thing that leapt out at me is an opportunity that I already know about and that I've submitted my CV for already. I'll tell you more about this one when I know a bit more myself!

My plans to get out into the garden again today have been thwarted by the continuing lousy weather...mind you, it can rain as much as it likes now, so long as it promises to dry up before the end of June, and stay dry until the end of July. I fancy a sunny festival season this year! 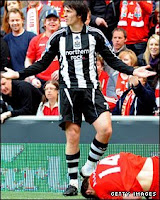 Read with interest the continuing developments in the Joey Barton saga. Now agreed, the boy is a nasty horrible toerag who I am glad didn't sign for Everton when that seemed a real possibility a few years ago, but I thought that whilst his tackle on Alonso was a shocker and deserved a red card, it was nothing like as bad as the Kevin Nolan tackle that ended Victor Anichibe's season back in February. So why did Newcastle not take a similar hard line with Nolan? One can only assume that 'things were said' between Barton and Shearer behind closed doors that had very little to do with the tackle and a lot to do with the current malaise that surrounds the Geordie club.

No doubt the boy has played his last game for them now - the question is, who would take a chance on him now? He has had so many 'last' chances, surely his only option is a new start overseas? A shame, because there's probably a better than average midfielder in there somewhere, but it's now impossible to separate the footballer from the man - and who would want a man like that in their squad?

Football again this evening, and writing before the ManYoo-Arsenal game, I'm hoping it will be a cracker tonight. ManYoo should, by rights, already be through but failed to take advantage of their dominance last week. I do fancy them to score tonight though - in which case Arsenal will need to score three - and I think that might be two more than they are capable of. An early Arsenal goal would make things very interesting though...

Interesting soundtrack today - Carbon/Silicon are the band formed by Mick Jones (formerly of The Clash) and Tony James (Generation X/Sigue Sigue Sputnik). They have released one 'official album (The Last Post, released last year) but prior to that, they put a lot of material for free download onto their website, including a full album (A.T.O.M.) and a number of EPs, of which 'The Crackup Suite' is one.

Jones and James have been mates for years, both being members of of semi-legendary punk collective 'London SS' before joining their respective punk bands, and sharing squats and flats over the years. I saw them live at Cornbury last year (my picture, opposite) and it's obvious just how much personal chemistry there is between the pair and just how much they are enjoying this stage of their careers - nothing to prove, enough money in the bank, churning stuff out for free as much for the love of it as anything else.

Oh, and Tony James is possibly the best dressed man in rock, if the natty suit he wore at Cornbury is anything to go by...

Anyway, judge for yourself - this is the video for 'The News', which opens their 'official' album.

Anonymous said...
This comment has been removed by a blog administrator.
8:06 am

Anonymous said...
This comment has been removed by a blog administrator.
9:15 am

Anonymous said...
This comment has been removed by a blog administrator.
12:05 am

Anonymous said...
This comment has been removed by a blog administrator.
11:54 am