Well, there's a coincidence for you. I decide to title today's blog as above, and then iTunes decides to accompany the blog with a spot of croonin' from the swingin' Mr B.

And there's nowt wrong with a spot of easy listening every now and again - especially when the voice is this good, and the selection of songs is so strong. And me mam likes Tony Bennett, so that'll do for me.

My reason for harking back to the fifties today really comes from the book I'm currently reading, Andrew Marr's 'History of Modern Britain'. I'm still reading the early chapters, which start from the end of the Second World War, and I'm finding the book absolutely engrossing. I've not yet got (quite) to things that happened in my lifetime, but essentially I am reading about the world that I was born into. A Britain struggling to remain a world power in the nuclear age, defining its role with the USA on one side and Soviet Russia on the other, unwilling to align itself with Europe yet presiding over the break-up of the Empire.

The Suez crisis is particularly fascinating - I'd never fully realised or understood the extent to which we were completely shafted by the Americans, who unwittingly precipitated the crisis in the first instance, and then actively hindered the (admittedly underhand) military action the Brits instigated alongside the French and the Israelis. The humiliation of the British at Suez seems to have confirmed to all that our time at the top table was coming abruptly to a close.

Similarly I had never really understood the implications of the Korean War either - a little skirmish that predated the far more bloody and important Vietnam War? Not really - it would appear that we came far closer to a full-scale nuclear conflict (involving the Chinese) than we ever did before or since - Bay of Pigs crisis included. The picture is of the Korean war memorial in Washington DC - not as immediately impressive or stark as the wall of names in memory of the Vietnam War but still deeply moving in its own right.

The book has so far had little to say about the partition of India, but I have a whole separate book to read on that subject in the 'pending' pile. My interest in this subject was piqued by another book I read on holiday about India that again touched on the tragedy of partition without going into detail - again, a subject I'm interested in understanding a lot more about.

Really interesting stuff, especially when placed in the more familiar context of social life in the fifties - the growth of car ownership, of immigration, the end of rationing and of National Service. 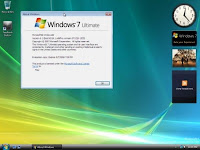 So that was this morning. This afternoon I've been dealing with the here and now - the cutting edge, indeed - experimenting with the latest flavour of Windows, Windows 7, which is available in 'Release Candidate' flavour free of charge until its official launch later this year or early next. So I've replaced Ubuntu on the netbook (for the time being, at least) and have been busy tweaking and downloading onto the new operating system. As it's still essentially work in progress, I've kept it well away from the desktop!

And first impressions are pretty good. I needed to reformat the netbook's hard drive from FAT32 to NTFS, but having done that it loaded quickly and easily, picked up the wireless network straightaway and (so far) hasn't crashed once. Performance on sound and video seem no worse than under Ubuntu - possibly a bit better - and it all looks suitably pretty and flash. Will keep you posted as I get to grips with it!

So back to Tony Bennett. There was a time when I would have dismissed this sort of music completely out of hand, but (no doubt as I get older) I can appreciate the talent and the craft involved in producing these songs, that are now essentially timeless. Tony Bennett did his profile no harm by appearing on MTV's 'Unplugged' with kd lang and Elvis Costello, and I would recommend both that album, and the album he did with kd lang (called A Wonderful World) to you. Ideal for those late, quiet nights with a single lamp and a single malt. Oh, and for crooning along to in the car - preferably when you're by yourself!

Here's Tony with the one you'll all know, performed 'Unplugged' back in 1994: