Today's soundtrack: Elbow - Asleep in the Back

Quiet day in today, mainly spent slouched in front of the telly watching the football. Firstly the Reading - Birmingham game, one of a series of games that would decide the final promotion/playoff places from the Championship. Birmingham eventually took it at a canter, confirming their automatic promotion and Reading's place in the playoffs. Elsewhere, it was nice to see both Preston and Burnley getting through to the playoffs - both clubs I have a lot of time for. Real football clubs, from real footballing towns with a long tradition and clubs that deserve a spell back in the big time.

At the other end of the table, it was a shame to see Norwich being relegated. I lived in Norwich for four years back in the '80s and went to Carrow Road a fair bit, so again have a soft spot for the club. Hopefully they'll be back up with the big(ger) boys again soon.

All of this was of course just a starter for the main event, Everton visiting Sunderland at the 'Stadium of Light' (who thought that was a good idea?) in a game that meant little for Everton other than an opportunity to reinforce a fifth/sixth place finish, but which was an important opportunity for Sunderland to get the points that would ease their relegation worries.

Despite there being so much more at stake for Sunderland, they lacked any degree of urgency and after a rather lacklustre first half that Everton probably edged, an early goal in the second half from the tireless and inventive Stephen Pienaar and a second from Marouane Fellaini turned the game into a stroll for Everton. A welcome three points that might just give us a second consecutive fifth place finish, and a matchwinning performance from Pienaar that might just have been his best game in an Everton shirt.

Busy with the breadmaker again today, my own inventiveness involving a 'Tomato Focaccia' loaf that incorporated passata, olives and sundried tomatoes into a standard bread mix. And very nice it was too, served alongside the evening's spaghetti bolognese. Not sure I'd fancy it toasted and spread with marmalade though....

Stayed up late to complete 'The Longest Journey' on the PC. A nice looking game but possibly a bit 'linear' for my tastes. Be interesting to see whether Dreamfall, the sequel, is an improvement and how well it builds on the original plot. Will let you know...

Elbow on the soundtrack today. I'm sure I've mentioned my absolute love for this band - albeit a love that crept up on me slowly. I'd had a couple of albums for a while and not really given them the attention they merited. It was really their performance at Latitude last year that made me realise what a fine, fine band they are and just how good their latest album (The Seldom Seen Kid) is. 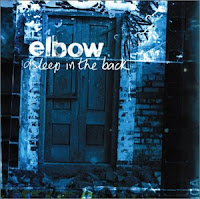 Today we've got their first album, 'Asleep at the Back' on the go, and I'm still staggered I didn't realise immediately just how good an album this one is as well. Newborn, Powder Blue and Scattered Black and Whites are all immense tracks, but there's hardly a weak track on the album.

For some reason most of Elbow's back catalogue seems to be on permanent sale at ridiculously low prices at the moment - so I urge you to get out there and invest. You'll not go far wrong.

Here they are performing 'Newborn' at the Lowlands festival last year. Beautiful.