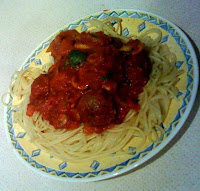 Oh, before we get into today's business - this is what the raw meatballs pictured yesterday turned into...yummy!

A busy day today - we'd arranged to meet Son and Girlfriend in Manchester for a spot of lunch, and then over to Leeds to visit the Dog's Trust with a view to having a new pet in the house. So it was an early(ish) start to the day, out of the house and over to the Big City. 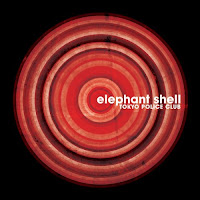 As is traditional, met up with the kids outside Fopp. Even though it's now owned by HMV, this little store is still a goldmine for all sorts of gems (Can you have a goldmine for gems? Thought not. But you know what I mean.) at ridiculously low prices. So it was that I came away with a couple of Doves albums to fill the gaps in the collection, a couple of discs by Tokyo Police Club (Canadian, not Japanese) and an Aztec Camera album I never knew existed. At a mix of £5 and £3 each, it would have been rude to leave them there. 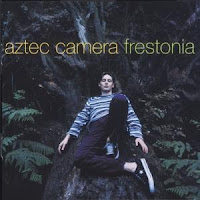 Then across to the new HMV in the Arndale that replaced the hapless Zavvi, but failed to be tempted by anything in there. The existence of Fopp (and, it has to be said, the internet and Rapidshare) make it difficult to be tempted by CDs at a price point above a fiver these days. Which means that, eventually, there will be no record stores in the high street to browse. Which will be a real shame.

Met up with Mrs W, then off to the Slug & Lettuce for a spot of lunch. A private party in the main eating area meant we were perched on the high stools in the bar, but that was fine. It's ok, the Slug & Lettuce. Clean, airy, tasty uncomplicated food and a decent selection of drinks as well.

We left the kids (Kids! They're 19! The same age as me - in my head, anyway) to continue wandering the streets of Manchester (off to Affleck's Palace, I believe) and we headed off to Leeds. Right to the very far side of Leeds - a bit disconcerting when I reached my usual Leeds turn-off on the M62 to have the Satnav tell me there was another 30 miles to go. But we got there in the end, having sat in the inevitable traffic jam for a while, an agonising two miles before our turn off. 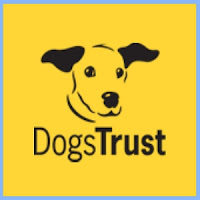 The Dog's Trust centre in Leeds is a very attractive, modern facility and if anyone is looking for a canine companion I would urge you to pay them a visit. They are very careful about the families they re-house their 'tenants' with, and their particular circumstances and experiences. Which must be a good thing. Mrs W confirmed our on-line registration with them, and then we went to have a look at the pooches.

But then a strange thing happened. Or rather, didn't happen. I fully expected Mrs W to fall in love with most, if not all, of the dogs and for the difficulty to be deciding which one we tried to form a bond with. But for whatever reason, the spark wasn't there. So we came away dogless. Now it might have just been the day, the dogs on offer, or it might be that there really are 'dog' people and 'cat' people - and we're on the side of the feline - I don't know. Now never say never, things may change in the coming weeks, but for the moment it looks like we won't be going back.

Anyway, long journey home to discover an intriguing envelope lying on the mat. Opened it to discover Everton had sent me a concertina'd cardboard 'clappy' thing to take to Wembley next week. Which is nice, if a little bit 'nu-fan' - what's wrong with the old wooden rattles? Still, it is a nice touch by the club and the kids'll love it. 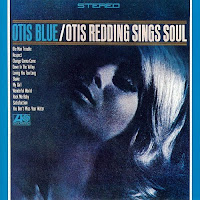 Well, I'm spoiling you with today's soundtrack. Otis Blue is one of the greatest soul albums ever released - no, scratch that, one of the greatest albums ever, in any genre. It catches Otis at his peak and every track is a gem - the covers (Satisfaction with horns - the way Keith Richard always imagined it), the originals (Respect - only bettered by Aretha's version) and some great versions of Sam Cooke songs, Otis acknowledging his great hero. Clocking in at just over half an hour, the album doesn't outstay its welcome, but not a second of its 32 minutes is wasted.

Here's Otis at Monterey - possibly his finest moment, playing to (and toying with) the 'love crowd' with I've Been Loving You Too Long and Satisfaction. Pure gold.