Back to the daily grind after the Bank Holiday weekend today - which for me meant catching up on the domestic chores - including the sodding ironing. 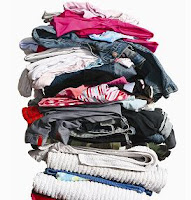 Now I am sure the domestic goddesses (and gods - there must be one or two) would tell you that the trick is to do it 'little and often' so it becomes less of a chore. I am more of the 'let it mount up until you've got nothing left in the cupboards to wear' persuasion. Which is fine for about three weeks, but then you find that the door to the airing cupboard is starting to bulge at the seams.

So I got to it. In any event, I needed to free up some space in the airing cupboard for today's little 'experiment' - more of which later.

Again, I suspect the expert ironers amongst you would suggest organising the pile into some form of order - so that you do all the shirts together, then all the trousers, then tops and t-shirts? No? I prefer the element of surprise in my ironing - possibly less efficient, but maybe more fun?

In any event, I didn't finish, so the joys spill over into tomorrow. 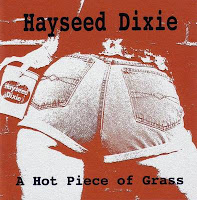 At least my innate ability to multi-task (are you reading this, potential employers?) allows me to iron and listen at the same time, ironing to a very 'up' setlist comprising Hayseed Dixie (bluegrass versions of the classics - Whole Lotta Love, War Pigs and This Fire on fiddle...), The Chieftains (more fiddle, and lots of Irish jiggery) and a compilation of '80s 12" singles (slightly fewer fiddles, rather more synthesisers, makeup and archness).

So the ironing wasn't all bad.

So why did I need to make some space in the airing cupboard, readers? Well, to help my dough rise, of course. And I mean that quite literally, it's not a crude sexual metaphor. Would be a bit sad if it was.

Today, we move to Advanced Breadmaking, by not letting the machine do all the work - actually taking the dough out after the initial rise, and shaping and baking by hand (well, the baking is done by the oven, but you know what I mean). Why? You might ask. Well we needed some bread rolls to be filled with sausage and onions, but I also wanted to do a dry run for tomorrow's slice of culinary experimentation. No, I'll tell you tomorrow. 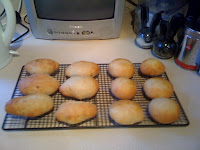 So did it work? Yes, it did, actually - see the evidence opposite. I have to say the round rolls were somewhat easier to shape than the 'finger' rolls were (unless the fingers in question are particularly fat and arthritic) but ultimately they smelt, and tasted, exactly as you would want. And the sausages did fit quite snugly into the finger rolls as well, with room for a spot of onion and some brown sauce.

Today's soundtrack comes from White Denim, a trio from Austin, Texas who made a few ripples last year with this album, 'Workout Holiday'. Very difficult to classify them other than as 'indie', which they undoubtedly are, or were, this and their previous album originally being self-financed and issued. If that makes them sound a bit amateurish and ramshackle, that does them a bit of a disservice really. They are good fun and worthy of a minute or two of your time. Sadly in pulling this blog together I note that they were playing in Liverpool seven days ago and I missed them - also that they are not doing the UK festival circuit this year. Ah well, never mind, Let's Talk About It instead....