A surfeit of sporting entertainment today - the Catalan Grand Prix, overlapping with the Manchester derby, followed by Arsenal-Chelsea. Where was a boy to put his priorities? And would he have any say in what those priorities were, given the amount of footy already watched in the last week?

Happily, Mrs W is more than understanding when it comes to things like this, and this season has taken more than a passing interest in the Grands Prix.

And so we settled down, having just wolfed down a lovely lunch of scrambled egg and smoked salmon on toast made with yesterday's 'milk' loaf. Using organic, free-range eggs, and Alaskan smoked salmon from Asda (worth the trip for this alone - it's fab) with just a squeeze of lemon, it is fantastic, believe me.

This Grand Prix season is remaining as interesting as it started - although the other teams are doing their level best to catch up, Brawn continue to defy logic by maintaining, if not increasing, their technical advantage over the chasing pack. First corner mayhem, with firstly Barrichello stealing a march on Button to take the lead, then a coming together towards the rear of the chasing pack leading to a confetti of carbon fibre and the introduction - yet again - of the safety car.

And it was essentially within this period that the race was won and lost, with Button's engineers deciding to switch to a two-stop strategy in contrast with Barrichello's three-stopper. Despite Barrichello's early lead, he could not push hard enough to make up the time lost by the additional pitstop, and Button was able to take advantage. Coupled with his better use of the harder tyre compound, and the newly competitive Ferrari holding up Vettel in the Red Bull, it became really quite straightforward for the Englishman, who has now won four out of five and is beginning to look like a serious contender. At least for as long as the Brawn car can retain its technological advantage anyway!

And so over to Sky, for the conclusion of the Manchester derby. By the time I switched over, it was all over bar the shouting so let the game wash over me somewhat. Did enjoy Ronnie's hissy fit though - bless! Just about sews it all up for ManYoo now, and will leave Big Red potless for yet another season. Shame!

Mrs W had vacated the lounge by this stage, so I decided to cut my losses and pass on the third event of the day. Which turned out to be a shame, as it sounded like a fun game. Hopefully now Chelsea have secured third place, they'll switch off mentally now for the season - until just after the FA Cup final, anyway! 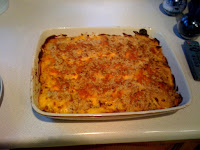 Leftovers for tea tonight - pasta bake made by combining the remains of the bolognese sauce from last week with some fusilli, topped with cheese sauce and breadcrumbs. Plenty left for tomorrow too!

Jimi on the soundtrack - this is the third disc of a four-disc box set (tastily held in a purple velvet case) comprising a number of alternate takes and live tracks from his brief but majestic career. Not a 'greatest hits' as such, but definitely not the scrapings of the barrel either.

You can't really go wrong with Jimi - the man was such a master of his instrument that there is beauty in virtually everything he recorded and while some of the live jams can get a bit self-indulgent, there are enough jaw-dropping moments to make up for this. Taken from us far too soon.

Often referred to erroneously as a 'wild man' of rock, this gentle man was capable of great beauty and sensitivity in his playing. Little Wing, performed here at the Winterland in San Francisco in 1968, is a classic example. No histrionics, not a note out of place.