Today's soundtrack: Gomez - Bring It On

After dashing round for the last couple of days, I spent today at Waring Towers doing, it has to be said, very little indeed. 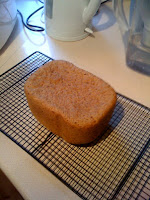 A bit of baking - another 'brick', this time made with 'spelt' flour (I bought a bag a while ago, just because the recipe book had a batch of recipes using this particular flour and I though I might have a go. Well, today, I got round to it. Spelt, a bit of Googling revealed, is a hybrid of wheat and goat-grass (whatever that is), originating in Central Europe. In breadmaking, it produces bread not unlike rye bread, but with a lighter, nuttier taste. It doesn't rise in the same way as normal wheat bread, even with the addition of a lot more yeast, so again it looks as though something's gone wrong with the loaf even though the recipe warns that the loaf will have a 'slightly sunken appearance'. No idea what it tastes like yet, although it smells pretty good. Mrs W will no doubt turn her nose up in disgust, so it'll be all mine to enjoy (or not....)

Safe in the knowledge Mrs W isn't going to be using the spelt loaf for her cutting-up, I thought I'd better bake another, which is cooking as I type. Honey and Sunflower, this one. Not sure about the honey - accurately measuring out honey by the tablespoon (and then transferring the measure into the baking bowl) is more miss than hit - but we'll see.

Then sorted the car insurance out. Pretty painless to do, using the same comparison sites we've used previously which have all the details already in place. Not so painless to pay for, though...

And did a bit of reading. I've been getting through 'Human Traces' by Sebastian Faulks for a while now and its been a bit of a slow burn, but a long session with the book and a pot of coffee this morning got me a good way through it. I have enjoyed quite a few of Faulks' books over the years, most notably 'Birdsong' which is one of my (and many other peoples) favourite novels.

Human Traces is set in the late 1800s, and is the story of two young men who both have a burning desire to understand the workings of the human mind and, in particular, the various mental illnesses that can afflict the mind. In the period covered by the book, the treatment of mental illness is coming to be seen as a branch of 'real' medicine rather than as at best, a poor relation or, at worst, a myth - mental illness essentially being untreatable.

The main characters meet as boys, developing their common vision whilst in their teens. The book traces their separate development, living and training in different countries, until they come together to build a practice in the Austrian Alps. As they mature, their interests, beliefs and philosophies diverge, introducing a key element of tension to the narrative. Their families become inextricably linked, both professionally and personally, adding further to the complexity that clouds and tests their common vision.

Reviews of the book have been mixed, the consensus being that the complex scientific expositions necessary to deal with the book's main subject matter get in the way of the actual story. I think there is some truth in that, although personally I find the two elements of the book equally interesting (if a touch challenging) on occasion. Still, 150 pages (of 600) still to go, so I'll reserve total judgment just yet. An interesting, if challenging, read. 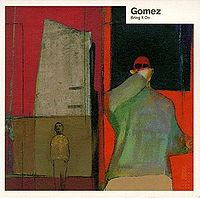 If I'd started writing this an hour earlier, you would have had some AC/DC on the soundtrack - sorry! As it is, we're listening to Southport's finest, and specifically to their first album, which remarkably won the Mercury Music Award in 1998 ahead of Massive Attack's Mezzanine and The Verve's Urban Hymns. I've had the album for ages but rarely play it - it tends to wash over me and I find its faux-Americana vocals and stylings a bit rich for a bunch of Lancashire scallies (even if they are, allegedly, all good Evertonians). Interestingly, listening to it now, I'm hearing a lot of Kings of Leon in there and I'm thinking it deserves another chance.

This is Tijuana Lady, from Bring It On, being performed live in HMV in Liverpool - one of the very shops I visited when I was there yesterday!