...as Bo Diddley might have said, once upon a time. 'Shave and a haircut - two bits' is, as you might know, the classic chugging 'Bo Diddley beat' that he used in the majority of his songs, and that can also be heard in Eric Clapton's 'Willie and the Hand Jive' and The Smiths' 'How Soon is Now' amongst others.

And today's tenuous link comes down to the fact that, yes, I had a haircut this morning. And a shave, come to that, although I managed that myself. For the haircut, I took myself off to see Debra and enjoy a bit of pampering. It's a lovely experience, the haircut - especially nowadays when the hairwash includes a head massage, and I get my own little cafetiere of fresh coffee. And a bit of girly chat, of course. 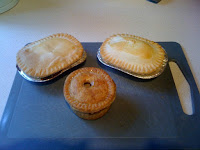 And given the proximity of the hairdressers to the local quality butcher, it would have been extremely rude not to pick up some pies for tea tonight. Steak for Mrs W, Steak and Ale (natch) for yours truly. To be served with chips and beans. And, in my case, a litre of gravy. 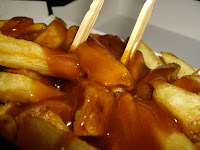 Mrs W, not being a Northerner, does not fully understand the concept of gravy - the need for summat 'moist' (copyright Peter Kay) with one's tea. Sadly the delicacy that is the 'dip butty' is also not on the Mrs W menu.

Made a loaf with oat and bran in it yesterday. Very tasty for breakfast, especially toasted, but unwise to eat before leaving the house. The bran content has an unnerving effect that I barely managed to contain at the hairdressers. Too much information, I know.

Had a nice email exchange with a friend this morning re Glastonbury. She's going for the first time (a Glasto virgin, if you will) and is sorting out the necessaries for camping. She's fretting a bit but she'll love it. Even if it rains. Probably. Had a quick look through my list of essentials today and decided to invest in a big waterproof army surplus poncho via the web. Just in case, you understand.

Bit more progress on the job front - there's a meeting coming up with an organisation in the near future, when diaries can be co-ordinated (not that my diary takes an awful lot of coordination at the moment). Bit of a flyer, but they are happy to talk to me, which must be a good thing. There are one or two things that I bring to the table that might be of interest to them, and I know a couple of people already in the firm who would (I think!) say nice things about me if asked...so let's see!

Watched 'Waiting for Guffman' last night whilst Mrs W was convalescing with the bad back. Nice film from the Christopher Guest stable of semi-improvised films. Whilst it doesn't quite hit the heights of Spinal Tap (playing Glastonbury - Yay!) or Best in Show, it's still a good 'un with some nice moments. It helps I think if you've ever been involved in amateur dramatics of any kind, as indeed I have, a loooong time ago! It's currently dirt cheap in Fopp, about three quid I think - impossible to leave it there! 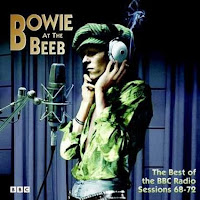 David Bowie on the soundtrack today - at the Beeb. This is a three-disc CD set that includes two discs of archive material, from early 'Laughing Gnome' era Bowie through the Ziggy years. The third disc however, that I am listening to now, is a one-off concert recorded for the BBC in 2000, covering the breadth of his career - and it's an absolute cracker! Unfortunately, despite virtually every other note the man recorded being on Spotify, I can't find the BBC stuff. Must be a licensing thing.

However the whole thing would appear to be sat there on YouTube - so as a sampler, here's The Dame performing 'Wild is the Wind'. Someone else in need of a haircut I think, David!