Had to get the old boiler seen to today. No, don't worry, Mrs W is fine - I'm talking about the one that sits in the airing cupboard (arf!). Nothing serious - just the annual service by British Gas. The service itself went fine - no problems with the system - but it was interesting emptying the airing cupboard of all the stuff in there so the engineer could do his job. In doing so, I found out that we have 26 towels in our airing cupboard. Now bear in mind that this is mostly a two person household, and that I am just talking hand and bath towels here - not teatowels, which are another thing entirely. 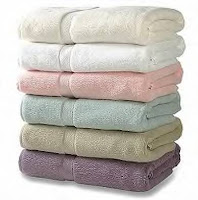 Also, the bathroom, en-suite and downstairs loo all have their own full complement of towels in situ, and I am sure there are still more towels in spare bedrooms and draped over radiators.

So between the two of us - and being conservative - we must have over thirty towels in the house. Was it Hitchhikers' Guide to the Galaxy that made the point about a towel being an essential piece of kit come the apocalypse? We'll be laughing, I tell you.

And whilst on the subject of laughing....just how funny was the football last night? The Chelsea game started sublimely, with one of the best goals I have ever seen - Essien's strike was perfection and a thing of great joy to behold. Following the goal, Barca had tons of possession without really threatening to do a great deal with it. Chelsea were content to give Barca that possession and break forward when the opportunity arose. When they did, they had a few penalty shouts ranging, admittedly, from the marginal to the stonewall. But no matter - they were winning and when Barca had a man sent off after a coming together with Anelka (a dodgy decision in itself) it was all looking pretty academic.

That is, until Iniesta popped up to equalise in the second minute of injury time. The away goal meant that Barca, not Chelsea, would now go through. And Chelsea didn't like that, one little bit. After a very optimistic penalty shout Michael Ballack ran fully 60 yards next to the referee, flapping his arms in his face like a demented pigeon. After the final whistle the referee (who had the temerity to come from Norway) was surrounded by Chelsea players, including Didier Drogba, who had lost all control...."A f*cking disgrace" he told the world via a conveniently pointed TV camera.

Better was to come. Back in the studio, Jamie Redknapp looked close to tears in the knowledge that cousin Frank would not be going to the final in Rome, harping on about the nationality of the referee as if this had any relevance at all, interrupting the only slightly less hysterical Gullit and Souness. Sky obviously gutted not to get their dream final.

All good, clean fun. And they did have a point, of sorts. Chelsea can count themselves unlucky not to have been awarded at least one penalty (although talk of four clear cut penalties is patently ridiculous) but rather than condemning the referee, Mr Drogba might consider whether the chance he missed to make it two-nil was a greater or lesser 'disgrace' than the ref's performance. And reflect on the fact that he might get more penalties awarded if he did not go to ground like an extra in 'Platoon' at every opportunity...?

The only downside of course is that they will have had no distractions going into the FA Cup Final and we may get hit by a backlash. But still, it was fun while it lasted.

Out into the garden today, a-mowing and a-weeding and a-seeding. It's looking a little bit better after its feeding the other week, and I have surreptitiously moved the birdtable in the hope of repairing the wreckage underneath its usual site. Not sure I'll get away with that one though.

You're an awkward bunch, you lot. "Forget the recipes, give us guitar stories" says one. "Any fool can play a guitar now making a good pie is a real challenge !" says another. Anyway, I've had a request for a Shepherd's Pie recipe - with pictures. Now whilst I do a mean Shepherd's Pie (actually Cottage Pie, if we're being picky - although I have made composite pies in the past, combining beef and lamb mince in the pie) it's not on Waring Towers' menu in the near future so I can't provide pictures I'm afraid.

But watch this space - I've been blathering on for long enough already today - will provide said recipe when I've got less to say. You've no idea how tricky it is, trying to keep you lot entertained on a daily basis!

But it's worth waiting for, I promise.

New Order today, from their box set entitled 'Retro', a five disc collection that pulls together a range of live stuff, obscurities (including the theme music to 'Best and Marsh' on the telly) and greatest hits.

As I type, I am listening to 'The Perfect Kiss', which might just be my favourite New Order track, especially in its extended version which includes an absolutely fantastic bass run played by Hooky and some ace synth drum banging and crashing.

And by the magic of YouTube, here it is, in all its glory. Love Hooky's first bit of bassage (39 seconds in), but the fun starts from around 7:30 through to the end, it going gloriously mad from around 8:50 (how high is he playing that bass?) with a funky run from top note to bottom note to finish. I can only dream....