Well, Plan A for today didn't happen, so we reverted to Plan B.

Which was fine by me, as Plan B involved sitting in front of the telly all day watching the sport.

First off though, there was a loaf to bake, so we had some fresh bread to eat at lunchtime with our bacon and sausage. White loaf with added wheatgerm, since you ask. Very tasty and crusty, but perhaps a little heavy? No matter - stuffed with Lincolnshire's best, a couple of of rashers of back and a drop of HP, it really hit the spot.

I'll bet they weren't eating sausage and bacon butties in Monte Carlo today, though. Their loss, if you ask me. For all the glitz and glamour, the race can often be a bit of a let-down as the lack of overtaking opportunities can turn things into a procession. And, barring a bit of excitement around tyre wear and a couple of brushes with the Armco, that's what we had. Jenson Button won't be complaining, though. Despite the fact that the racing feels more competitive this season, Button has still won five out of six and the

World Championship is looking more and more likely for the lad. Which is nice, actually. whilst he might have 'lucked into' a competitive car this year, he still comes across as a nice lad who, having served his dues over the years in a series of ordinary cars, is now proving to be a very smooth - and fast - driver.

But the motor racing was really just an aperitif for the main event, the final matches of the football season. For once, I chose not to trawl the internet for a snide feed of the Everton game. Instead, I settled down to watch the Villa - Newcastle game, with scoreflashes from Craven Cottage coming on my phone.

And all the results went the right way, too. We won - comfortably - at Fulham with Leon Oman scoring both goals and apparently benefitting from being rested. Slightly worrying to hear that Phil Neville and Stephen Pienaar came off 'feeling their hamstrings' - let's hope they are both ok for the Cup Final next week. So that's fifth place - best of the rest - for the second year in succession and top six for three years on the trot. We continue to overperform, but the worry is that Moyes thinks this is as good as it can get and moves on. Which would put us right back in the shit.

Oh, and speaking of which, Villa beat Newcastle to send them down to the Championship. Thus demonstrating that you can spend loads of money on high salary, big-name players - but without managerial integrity and stability (and ability) it will all be a complete waste. Despite what was at stake, Newcastle seemed unable to rise to the occasion and struggled against a Villa team that has also been underperforming for weeks. Passion and spirit are overrated qualities in football, but you do feel that just a hint of desire could have made the difference. Still, the Premiership will not be the poorer for their relegation. 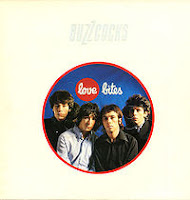 Buzzcocks on the soundtrack, their second album, 'Love Bites' which I think is very underrated compared to their first and third albums. I loved it when it came out, and in its reissued guise comes with a set of Peel sessions, live tracks and demos. However it's the quality of the original album that shines through. Ever Fallen in Love was the hit, but tracks like Sixteen Again, Nostalgia ("for an age yet to come") and ESP add a pop twist to their essential punkiness.

Here's 'Sixteen Again' from the Whistle Test in 1978. Fantastic.