Off to Goodison then, for the last home game of the season, against West Ham. The last couple of home games have been a touch frustrating - one eye on the cup final I think - but West Ham have always been the sort of team to allow you to play a bit of football so I was hopeful of a good game and a couple of goals as well.

Earlier, ManYoo did just enough against Arsenal to win the premiership for the 18th time, thereby equalling Liverpool's record. They will be upset!

The game started well, with plenty of neat passing and Fellaini imposing himself on the game more than he has done recently - he seems to have got the silly fouls and bookings out of his system now, and is beginning to settle into his advanced role in midfield. We had loads of possession but lacked the 'killer' ball into the box to capitalise. Then, out of nothing, West Ham scored with a rocket of a shot from way outside the area. A suggestion that Howard could have done better but it was an excellent goal, right out of nothing.

Pleasingly, we did not panic (at this stage, anyway) and kept pressing. Got our reward before half time when Tim Cahill was tripped in the area when through on goal. Last man, red card. I know it's the letter of the law, but it did strike me as harsh. Saha converted the penalty and we went in at half time level, and deservedly so.

Then, a few minutes into the second half, we were ahead, Joe Yobo drifting in at the back post to shoot through a crowd of players from a Pienaar corner. Should be game over, against ten men, but then we did let West Ham back into the game a touch on the break, and they had a couple of very decent chances to pull level. Luckily, Howard was equal to the task and the score stayed at 2-1.

Finally we got the third, decisive goal. Made by the excellent Steven Pienaar, shimmying past the defender to the byline and squaring just beyond Green's lunge for Saha to score the easiest goal he'll ever score. Comfortable, and a chance to give some of the reserves a runout as Moyes looks to finalise his Cup Final team.

Lars Jacobsen will have done his chances a power of good with a composed performance at full back, and there was a good runout for Saha, who must be favourite to start up front with Vaughan on the bench. Excellent performances from Fellaini and Pienaar as well, and Phil Neville was very impressive in centre mid.

After the final whistle, the end of season lap of honour took place - nice to see Phil Jagielka out there, as well as the Yak and Victor. No Arteta, who is presumably back in Spain at the moment.

In other news, Newcastle got thrown right back into the mire, being beaten at home by Fulham. As much as I would love to see them go down, I have to say they were very harshly treated by their ref, disallowing what looked to be a perfectly good goal. Villa were held as well, which allows us to claim fifth spot, which we shall retain if we beat Fulham at Craven Cottage next week.

Then home, for Moroccan chicken wraps (yum!) and the new(ish) Guy Richie, 'Rock-n-Rolla'. Not a bad film, although by half-concentrating I didn't really keep up with what was happening and the film seemed to lack any particularly likeable characters to identify with. Nice to see Idris Elba in the film, although his English accent just sounded wrong when you're used to his Baltimore twang. And yes, I do know he is actually English! 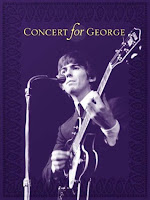 The soundtrack today is from the tribute concert to George Harrison organised by his family and Eric Clapton, featuring Paul and Ringo, along with Clapton, Jeff Lynne and Tom Petty amongst others. The concert is out there on DVD and is well worth watching.

Two highlights for me - Macca starting 'Something' on solo ukulele, before being joined by Clapton and the rest, and then best of all Joe Brown - also on ukulele - performing 'I'll See You in my Dreams' as the final number.

For some reason YouTube seems to have no clips from the concert itself, so here's Joe performing the song on Jools Holland...