The title for today's blog is possibly the most painfully tortuous pun I could have come up with and I apologise to you all. It's staying though. The more astute amongst you will recognise the reference to West Brom - The Baggies - who were, indeed, 'pants' today and got the relegation that had been on the cards for so long.

When you are adrift at the bottom of the table, but two wins have given you a sniff of a potential escape route, the last thing you need is to be presented with is a home game against Liverpool, a team who have beaten you 6-0, 5-0 and 3-0 the last three times they have played you at home and who you have never scored against in the Premiership era. Still, hope springs eternal and there was always the possibility that Liverpool would switch off having lost the mathematical possibility of winning the title.

So after a typically graceless interview with the FSW, we were off. And it all looked so promising for a time. Driven on by Jonathan Greening, the Baggies had a couple of excellent chances to take the lead. Unfortunately some comedy defending that possibly encapsulated West Brom's season in an instant, allowed Gerrard in. 1-0, game probably over. 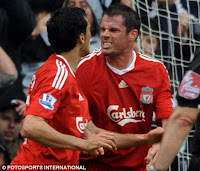 A couple more chances spurned, some comedy attacking and a very good shout for a penalty turned down, and Liverpool broke with pace and Kuyt made it 2-0 and the game really was up now. A touch more entertainment value came from Carragher squaring up to Arbeloa but ultimately that was it.

A shame really. I've a soft spot for West Brom, who do try and play football and, in patches, looked very good indeed. But ultimately it looks increasingly like the way to come up and survive in the Premiership is by playing ugly, stifling football and the Premiership will be the poorer for losing the Baggies. They seem doomed to be the ultimate yo-yo club - too good for the Championship, not good enough for the Premiership.

The lousy weather put the mockers on any thought of going out, so the day drifted involving, as it normally does, a lot of internet-related timewasting. Which is alright for me, with plenty of time to waste just now, but not so good for you wage slaves out there who need to fill your precious few hours of leisure time with quality activities!

Sorry. I can't offer quality today. Facebook provided, oh, minutes of mindless entertainment with a new game called 'Chain Rxn' that seems to be 'sweeping the nation' as they used to say. Worth a look if you are dabbling in the Facebook universe. I wouldn't be so crass as to invite my Facebook buddies - I always skip that option on your behalf!

Youtube also provided a moment of light relief - you remember me going on about Snatch the other week? Well some bright spark has extracted Bricktop's (somewhat fruity) dialogue from the film and used it to replace Darth Vader's dialogue in Star Wars. Hilarity ensues! Well, it tickled me in places.

Warning - this is definitely not appropriate to play through your laptop speakers in a work environment.....

In other news, no culinary delights to regale you with today, other than the delightful bacon butties made with freshly baked bread at lunchtime. Tea was the meal that might be politely referred to as 'finger food' but is generally described as 'fried shite' in Waring Towers. This normally comprises potato skins, southern fried chicken and breaded mushrooms with a selection of dips and sauces but may occasionally be varied by the inclusion of spare ribs or other such nibbles. All heated in the oven rather than actually fried, but you get my drift. Anyway, regardless, when it's just what you fancy (and it was) it is unbeatable.

Soundtrack today comes from New York's own Yeah Yeah Yeahs, and the punky first album. Fun band who don't take themselves too seriously - guitar, drums and singer (The hugely charismatic Karen O). None of the songs outstay their welcome and if you don't like this one - well, there'll be another one along in a minute.

This is 'Y Control' from Fever to Tell. Think it must have been a bit cold onstage...