The weather and a general case of Bank Holiday ennui combined to make this yet another lazy, lazy day. 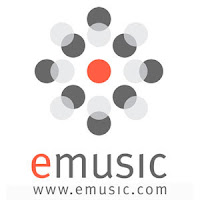 Luckily, it was eMusic day in Waring Towers, so I had some buying to do. For those who don't know, eMusic is a download subscription service. For the princely sum of £14:99 a month, I get to download 75 individual tracks - works out at 20p per track, as compared to the 79p per track typically charged by iTunes.

So what's the catch? Well there is none, other than the selection of music on offer, which tends towards the obscure... although there is a huge selection on offer, you won't find many household names here. What you will find though, are a lot of obscure gems from new, up and coming bands, and some classics in some of the more 'esoteric' genres. It's cheap enough to take a punt on some unknown stuff and it's never really been a struggle for me to 'spend' my credits each month - although others with less eclectic (or less picky) tastes might struggle.

My 75 credits this month went on an Iggy Pop 4-album box set of live material culled from his 1977 tour of Europe, the latest album by Camera Obscura which has been getting very good reviews in the music press recently, the last album by Jeniferever ('Choose a Bright Morning'), a Swedish band in the Sigur Ros mould, and the new album by The Leisure Society, an American alt-country band that have again been getting very solid reviews in the press. Oh, and two early Elbow b-sides to round out the 75 selections.

So, seven albums and change for fifteen quid. Sounds like a deal to me. 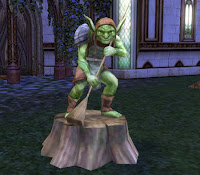 Then spent an hour or two running round Middle Earth slaying goblins and wolves, and bumping into hobbits wanting favours done. As you do. Reminds me of my goblin joke:

Bloke walking through the forest, comes across an ugly little fellow with green skin sat with his back against a tree trunk, bent forward at the waist with his head firmly embedded in his lap, hands behind his head.

No favours from Hull City, who managed to achieve something no other team has achieved for some time now - losing at Aston Villa, who leapfrog back above Everton into 5th place. All a bit academic at the top really, but Hull seem determined to relegate themselves despite the best efforts of the other teams at the bottom. While I would dearly love to see Newcastle relegated, I have a horrible feeling that the teams around them are all so bad that they will escape relegation by the skin of their teeth and subject us all to another season of absolute self-delusion. Ah well.

We finally finished off the second series of Dexter as well, all the loose ends being neatly tied up and leaving us waiting for the release of Season Three, which I think is currently being aired in the US. No spoilers, suffice it to say that our serial killer hero is free to carry on committing mass murder with impunity as someone else takes the blame for his misdemeanours to date. All good stuff, but leaves a DVD-sized gap to be filled by the ongoing CSI marathon, and by The Corner, a sort of prequel to The Wire that Son No 1 bought me for my birthday. 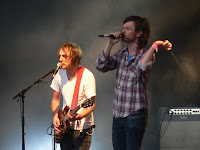 Soundtrack today comes from Idlewild and their 2007 album, 'Make Another World'. Idlewild are a Scottish indie band, singing from the same page as bands like Interpol and Editors - a kind of Joy Divisionesque gloomy post-punk with lots of minor chords, but with a lightness of touch and an ear for melody that sets them apart from a lot of other landfill indie bands. Definitely worth a listen if you like that sort of thing!

post-punk interpol editors mould?? you need to listen to their earlier records, a lot more punky, a lot less editors-y! cracking album that though.