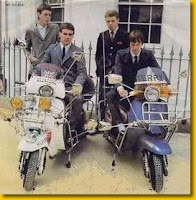 So said The Merton Parkas back in 1979, and who am I to disagree? Although I would argue that more than one tyre might be a good idea. Two at least, plus spare, if we are talking Lambrettas here (as no doubt the Mertons were, given their faux-Mod outlook on life).

And yes, that is Mick Talbot, later of the Style Council, on keyboards (and his brother Danny on guitar and vocals, I believe)!

My dilemma today (and for a while now) has been what to do with my own wheels. The lease on my car is about to expire and I have a decision to make.

Do I:
I don't know, and have been wavering for a while. Unfortunately I've got to make a decision - soon!

If I keep the car, then the final payment is actually not a bad price for the car in its current state and mileage - but to that cost, I have to add MOT, insurance and tax - all of which are also due imminently.

Spending the equivalent sum (or less) on a replacement will get me a car I know nothing about, and a long and tedious surf this morning proved I'd be getting a worse deal (pound for pound) than buying my own. And I'd still need to tax and insure it.

Either way, it's a chunk of cash out of the redundancy settlement I'd rather not be spending.

Can we get by with just one car? In the short term, probably. But inevitably it will tie one or other of us down and reduce our flexibility to do what we want to do - especially stuck out here in the sticks.

I'm not usually the most indecisive of individuals, but I really don't know what to do for best. A trawl through the lease paperwork today confirmed that I can't walk away completely scot-free - the MOT due this month is still my responsibility - so my current stance is to bear the cost of the MOT (happening this Friday) and see how I feel then.

Out to my new Supermarket of choice today to do the weekly shop - again, a pretty painless experience done first thing in the morning, leaving the day clear for my fruitless search for a solution to the car conundrum. Still, the fridge and freezer are looking a lot healthier than they were yesterday!

Took my frustrations out on the bass guitar this afternoon (take note, Simon) and was pretty pleased with myself as well. What seems to work best for me is using iTunes with tab sites like these to find songs I know well to play along to - and I definitely nailed 'Teenage Kicks', 'With or Without You' and Joy Division's 'Day of the Lords' today.

Well my prediction of last night's outcome was spot on, and I enjoyed the match even though it was over as a fair contest after about ten minutes. Feel for the young kid who slipped over in the lead up to United's first goal, but the second and third goals were pure class. 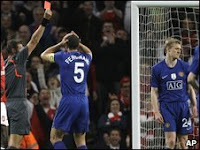 The Fletcher sending off was interesting as it highlighted an aspect of the rules that has always puzzled me - there seems to be a consensus that if a defender plays the ball before the man, then there is no foul. And as Fletcher got a slight touch on the ball nanoseconds before he took out Fabregas, there was no foul, no penalty and no sending off.

But is this right? I'm not sure it is. I think that if 'taking the man' is a certain consequence of the tackle then a foul may be awarded irrespective of the touch on the ball. Happy to be proved wrong, but it is interesting that whilst the overwhelming opinion on the web today is that it was harsh, those few writers who actually know what they are talking about (ie professional or amateur referees) are at least admitting the possibility that the decision just might have been the right one...

Answers on a postcard please!

Hopefully tonight's game will be a bit more of a contest. And whilst the football purist in me would love to see Barcelona progress, self-interest tells me it would be far better for Chelsea to have a big distraction a few days before the FA Cup final. I suppose it's win-win for me, then.... 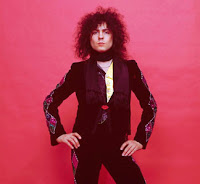 T Rex on the soundtrack takes me way back, to the time in the early '70s when me and my mates first started getting interested in this pop music stuff - the very first album that any of us bought with our own money was 'Electric Warrior' by T. Rex, and they were our heroes of choice for, oh, weeks, before the next big thing came along. Rabbit Fighter is a disc of demos that came with the CD reissue of 'The Slider' the follow up to Electric Warrior, and the last album that we gave any attention to before dismissing Marc Bolan as 'teenybop' stuff, beneath our rapidly maturing and evolving taste for the heavy and the prog.

Of course, revisiting this stuff years later, you realise just how good (and genuinely groundbreaking) it was at the time.

I mean, how good is this?

interesting that for a band called the merton parkas, none of the members are actually wearing one?