The title of today's blog is one of the songs on today's soundtrack album, itself a soundtrack to one of my favourite films, L.A. Confidential. Johnny Mercer's song is as good a philosophy as any at the moment - accentuate the positive, eliminate the negative - yep, that's what I'm trying to do, Johnny!

And a bit of positive news as well - my meeting on Monday looks like it's going to result in me getting in front of someone who may be able to help me out on the job front. Don't want to say too much at the moment, but if this comes off, it would be possibly the perfect solution to my current woes. But very, very tentative at the moment and I'm not going to get my hopes too high - or say too much - until there's something more tangible to report. Fingers crossed anyway and apologies for being cryptic!

Following on from yesterday's post, the Spelt loaf is indeed very tasty, went down very well at lunchtime with some mayonnaise and cold meats. I assume the Honey & Sunflower loaf was also up to scratch, as half of it seems to have disappeared already....

I also finished Human Traces, which came together very nicely in the end. A very powerful last few chapters as well, set during and after First World War, as the main characters aged and reconciled themselves to their life and achievements. There was one particularly powerful passage towards the end that actually brought me to the brink of tears - that's powerful writing indeed. 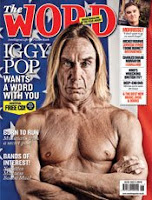 Also read this month's edition of Word magazine, which comes with a startling cover photo that I'm not sure will have the magazine flying off the shelves in WH Smiths this month. The nation's favourite car insurance salesman is there in all his wrinkly glory! Good article though...

I saw Iggy and the Stooges at Glastonbury two years ago, when he

instigated a massive stage invasion that he dealt with cleverly with a lot of charm - only to nearly break his neck slipping on the tons of mud that were now all over the stage! Great fun! I also saw him back in the '70s, with ex-Sex Pistol Glen Matlock on bass. "Little Iggy" nearly made an appearance that day, as I recall, although he did manage to keep the 'mouse in the house' on that occasion.

I think you know what I'm talking about here. Ahem.

I didn't get off to a good start with L.A. Confidential - the first time I watched it, was on a transatlantic flight on a video screen that must have been about two inches across. Suffice to say the plot was a little bit lost on me - I managed to confuse Russell Crowe and Kevin Spacey to the extent I thought they were one and the same - so was totally bemused when Russell Crowe's character was still alive and kicking after Kevin Spacey had been shot dead...

Eventually I saw the film on a decent sized screen and I loved it - some great performances from a great cast, wonderful period detail and a fantastic soundtrack. Chet Baker, Dino, Johnny Mercer - what's not to like? Sucker for a bit of croonin', me.