Well it'll do for me. Son No 2 is less than happy with the Glastonbury lineup, but there's plenty there to keep me happy. If I've got a complaint, it would be that there seems to be a big focus on the Pyramid Stage this year, with pretty weak lineups on some of the other stages - the JazzWorld Stage in particular is a disappointment compared to some of the great performances on that stage in recent years - Solomon Burke, Candi Staton and Buddy Guy last year alone. Rolf Harris this year just doesn't compete.

Click on the link or the image above for the whole kit and caboodle!

So who to see? All the big hitters I suppose, including Neil Young, Broooce and Blur, CSN I guess, and Tom Jones is a cert for the 'Sunday afternoon bag of wine' slot. Tinariwen and the Easy Star All Stars for a bit of 'World' at some stage in the weekend, Steel Pulse, The Gaslight Anthem (who could be this year's Hold Steady), White Lies. Spinal Tap (oh yes) and the Eagles of Death Metal . Everything else will depend on a combination of timing and whim, I guess.

It will be a shame to miss the Bunnymen, Tindersticks and Roger McGuinn, but I can't be everywhere unfortunately. Nick Cave and Doves can be sacrificed if necessary as I'll be seeing them elsewhere this summer.

Having said that, I guess the only guarantee is that I'll end up doing something entirely different come the moment (am I going to brave the Dance Village this year? At my age?). Maybe The Glade? Gong and Steve Hillage on Sunday night? Animal Collective in The Park instead of Neil Young?? 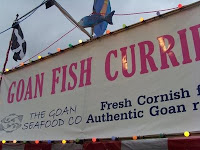 And what to buy? Last year's drunken ukulele purchase (that was me drunk, by the way, not the ukuleles) will take some beating, but the drums, the drums... Oh, and the food. I'll need to get down to JazzWorld, if only for the Goan Fish Curry and the Brothers Cider. Inappropriate headgear is always likely to be high on the list and of course lots of beads and stuff... 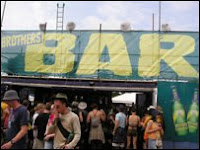 Bring it on. I'm ready now!

In other news, congratulations to Burnley, who won the Championship playoff today. Great news for my Burnley-supporting mates and great news for Everton - there's six nailed-on points already for next season (only joking, Dazza). The goal that won the match was a fitting winner, a great instinctive shot 'passed into the goal' from outside the area from the excellent Wade Elliott.

Glad to see Burnley up there though - a 'proper' football team, tidy ground and great fans.

Inevitably, the law of averages means that one of Mrs W's albums will come up on the soundtrack from time to time and so it proved today. I don't know an awful lot about Toni Braxton, apart from 'Unbreak my Heart' which appears on this album but, of its type, it's a pretty good album in my humble opinion. That's not to say I'd be hiking the length of Worthy Farm to go see her, but it makes quite a pleasant change from some of the stuff I listen to from time to time....