There are times when only a fry-up will do. Today was one of those times.

What did we have? We had thick-cut back bacon and pork sausages from the farm shop, double fried egg, mushrooms fried in olive oil, hash browns and fried bread. Lightly dressed with red (Mrs W) and brown (me) sauce. And washed down with big mugs of coffee and tea.

Absolutely delightful. Eaten early, so as not to reduce the impact of the curry planned for the evening - provided courtesy of Sainsbury's, who have a very tasty line of ready meals. In particular, they have started doing side dishes in little square(ish) pots that really go down a treat - we had some Bombay Potato and some Tarka Daal that were very acceptable.

Other than eat (and drink), there was little to do today other than sit in ad watch the rain fall. It's been a bit of a washout this summer, certainly up here in the grim North, and I'm just thankful that festival season was - by and large - a dry one this year.

So how to fill the day?

Well - inevitably - a bit of football management took place this afternoon. I'm still hanging in there as the season draws to a close, with a top ten position reasonably secure. Not sure that will be enough for the Board, despite my 'Manager of the Month' award for March, to secure my place for next season, but who knows?

Other than that, I spent some time chucking out a load of covermount discs from computer magazines stretching back years, and sorting out the various discs relating to computer programs that I've acquired over the years. I started doing this while I was looking for the software that came with my printer/scanner combo - I needed to install the scanner software on the new computer. Failed miserably in my search for said disc - why is it that the disc you want is always the one you can't find? - but in any event was able to download what I needed from the internet, in new, improved Vista-compatible flavour, so all was well eventually.

As you can tell, it was rather quiet chez Waring today - which is no bad thing on occasion!

Today ended with a better than average DVD watched while we ate our curry - called 'Passengers', it followed the recuperation of a number of airline passengers in the aftermath of a plane crash. Needless to say, not all was what it seemed at first, although the twist, when it came, wasn't too much of a surprise. A couple of second division actors, no big stars, but a nice way to waste an hour or two. 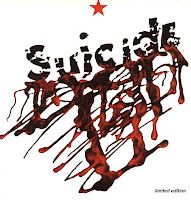 Today's soundtrack is hardly 'easy' listening - Suicide were one of the original NY Punk bands that came out of the CBGB's explosion of the mid-'70s. They stood apart from the pack by being a duo and by being synthesiser-led. An incredibly confrontational band live, it was not unknown for their performances to end in mayhem either caused by, or visited upon, the band.

Still, a hugely influential band in their own way, on the likes of Cabaret Voltaire, early Human League and Soft Cell for instance. You wouldn't play them to your mother, though. This, their first album, was re-released last year with a second disk including '23 Minutes over Brussels', a concert (in Brussels) that, indeed, lasted 23 minutes before degenerating into a full-scale riot.

I was a bit loath to search for 'Suicide' on YouTube - who knows what you will find? Anyway, I did find this - Suicide performing 'Ghost Rider', the album's lead-off track, some time in 1977-78. Will you make it all the way to the end?